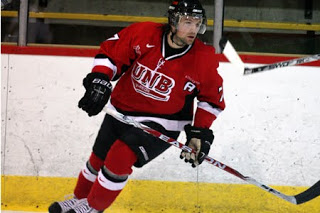 UNB Mens Hockey comes in at number two of the top 20 AUS Storylines of the 2009/10 varsity season.
They were the reigning national champs and the class of the toughest conference in the country.

The UNB Varsity Reds weren’t just the best university hockey team in the Canada, they were on pace to become one of the greatest teams in CIS history.

One year removed from winning a national championship in the spring of 2009, the Varsity Reds were working on an undefeated regular season in the hotly contested AUS conference.

UNB was the major storyline in Canadian university sport, until one of the most bizarre collapses of all time relegated them to an afterthought in a crazy season of AUS mens hockey.

On a late February night at the Aitken Centre in Fredericton, the Saint Francis Xavier X-Men came to town and gave the Varsity Reds their first defeat of the season. The X-Men had been struggling at the time, while the Reds were close to finishing off a historic campaign.

The fortunes of the two teams could not have changed more dramatically.

UNB received a first round bye, while fourth seeded St FX moved on to the AUS Quarter Finals and swept a UPEI team that had seemed to be getting stronger and stronger each week.

The plucky X-Men would play the number one ranked team in the country, the big, bad Varsity Reds, in a best of five semi final.

Nobody gave the X-Men a chance.

A week later, St FX was moving on to the AUS championship, while UNB was left to wonder where their glorious season had taken such a horrible turn.

After two crushing losses at the Aitkin Centre, the Reds were swept out of Antigonish, each game by a score of 3-2. The X-Men, led by former Moosehead Bryce Swan, had beaten the Reds 4 times in three weeks to completely shut down one of the most memorable campaigns in AUS hockey history.

There would be no accolades for this incredible group of athletes that had become the darlings of Fredericton. Just the bitter sting of disappointment of a lost season, one that had seemed so full of promise just two weeks prior.

It was the upset of the year in the Maritimes. The X-Men would go on to be a footnote in the Saint Mary’s march to a national title, getting outscored 15-6 by a Huskies squad that was hitting stride at the perfect time.

Meanwhile, Coach of the year Gardinar Macdougall, AUS player of the year Hunter Tremblay, and the rest of the Varsity Reds were left with heartbreak, and the anticipation of fall when UNB

will almost certainly be a national contender once again.
Bill McLean is the voice of Dalhousie Tigers Men’s Hockey on ssncanada and lives in Halifax. Follow Bill on twitter at “haligoniasports”. You can hear his radio show Tuesday mornings at 10:30 am on ckdu.ca or 88.1 FM.
email: bill@haligonia.ca

AUS Storyline #2; The Collapse of the UNB Varsity Reds.
https://haligonia.ca/aus-storyline-2-the-collapse-of-the-unb-varsity-reds-16197/