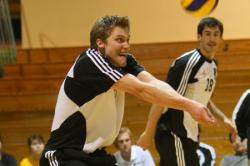 Sander Ratsep and the Tigers look to avoid an AUS Championship sweep at the hands of UNB.

by Bill McLean
AUS Women’s Volleyball Championship in Sydney
#2 UNB vs. #1 Saint Mary’s
Both teams cruised to semi finals wins as the Huskies eliminated the X-Women in straight sets and the Reds sent Dalhousie back to Halifax with a four set victory. Both teams are stacked with senior talent, AUS all stars, impact first year players, and height. Both teams have athleticism at certain positions but are not necessarily that dynamic. The match could simply come down to the Huskies having AUS MVP Kerri Smit on their side. When she’s on point, Smit can simply takeover a match and lead the Huskies to victory. The match up in the middle of Celina Abba and Tessa Felix will be outstanding, and the play of the Huskies setter Jane Pegg could be the X-Factor for SMU.
Prediction: Take the defending champs to go back to back. Final score: 3-1.
AUS Men’s Volleyball Championship at Dalhousie- Game 2
#1 UNB vs. #2 Dalhousie
The Tigers are one loss away from having their consecutive championship streak halted at a mind boggling 24. The Reds have a lot of seniors who have been taking their lumps from the Tigers for years and are looking to finish their careers as winners. Dalhousie is stacked with seniors who don’t want their careers to end being “the team” that broke the streak. The match up in the middle with Max Burt and Jacob Kilpatrick is about as intense as it gets, and Sander Ratsep looked unstoppable at times in Game 1. On Friday night in Fredericton the Pit was packed for the Reds five set victory, hopefully Tigers Nation will respond and “pack the ‘Plex”. This is a can’t miss game for volleyball fans, UNB /Dal alumni, and anyone who loves sport and the passion it can create. The game is at 3:00 on ssncanada if you can’t make it to the Dalplex.

Dalhousie (4-14, 14 pts) at Acadia (8-8, 22 pts)
After a convincing loss to Acadia last night, the Tigers are officially eliminated and now looking forward to next year when former Axewomen Keisha Brown joins a talented core of guards/forwards in Courtney Thompson, Anna Von Maltzahn, and Trish Mcneil. Acadia is looking to build on playoff positioning by jumping past Saint Mary’s into fifth place. The Axewomen are getting hot at the right time, now 7-4 since the Holiday break.
Saint Francis Xavier (12-5, 34 pts) at Memorial (10-7, 28 pts)
After beating MUN 61-58 last night the X-Women are now 6-1 in their last seven games and have a bye on the brain, trailing CBU by only 2 points. But…..beware the Seahawks on Sunday. Memorial is 6-2 this season in the second game of the weekend set and always seem to play with a lot more energy and focus on Sunday.
Cape Breton (14-4, 36 pts) at UNB (14-4, 40 pts)
This is another huge 4 point game in the standings today on Senior Sunday in the Pit. Not only will the Reds be honoring Leah Corby and Amanda Sharpe, but it will be the last women’s basketball game played at the old barn on the bottom of the hill. The Reds beat CBU 71-68 yesterday and with a win today can move 8 points ahead in the standings and secure first place in the conference. Don’t think for a second that Fabian Mackenzie and Kari Everitt have any plans of playing nice house guest. This is the type of scenario that the champs love and they’ll be out to spoil the party.

Dalhousie (13-5, 42 pts) at Acadia (4-12, 12 pts)
As mentioned yesterday, Acadia is still in the driver’s seat for a playoff berth with a very favorable schedule that includes a two game set vs. MUN in Wolfville with 8 points up for grabs. But at some point the Axemen have to win a game to get started. Steve Bauer’s troops have now lost nine in a row and fell behind 25-13 to Dalhousie yesterday after the first quarter. The Tigers are locked in as the number 2 seed in the AUS playoffs but seem hell bent on playing sharp, focused basketball to finish out the stretch so Acadia will need their best performance of the season if they are to snap this losing streak.
Saint Francis Xavier (12-5, 32 pts) at Memorial (3-14, 8pts)
The X-Men are locked in as the three seed at AUS playoffs but are looking to establish momentum and chemistry coming down the stretch. There are whispers among AUS pundits that Will Silver could be a first team AUS all star this year and Terry Thomas has become the most dynamic rookie in the conference. Thomas scored 26 points yesterday on 12-15 shooting.
Sportstream is the webcasting home of the Saint Mary’s Huskies and the Subway AUS Men’s Basketball Championships. Follow us on twitter @_sportstream_ and check us out facebook.