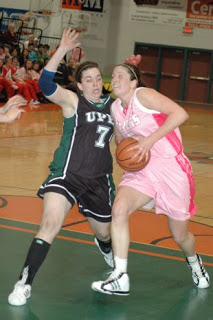 Kari Everitt will be looking to close out her career with another AUS Championship.
(Photo Credit: T.J. Colello)

by Dave Chafe
The Cape Breton Capers enter the tournament with the opportunity to become the first school to win three consecutive championships since UNB’s run of titles from 1990 to 1992. The Capers enter the tournament having won nine of their last 10 games including a decisive 74-60 win over fellow contender UNB to close the season giving them a split of their two game season series with the Varsity Reds. The Capers also split their season series with Memorial, while taking both games from the St. FX X-women and winning three of four against the St. Mary’s Huskies.

The return of Kari Everett with her 17.6 and 6.1 rebounds per game along with the emergence of 6-2 Denisha Haywood as a dominant rebounder and interior defender sparked an 11-2 post-Christmas run for the Capers. Haywood joins fourth-year Stephanie Toxopeus to give the Capers one of the toughest interior post tandems in the conference. Everett is capably supported offensively by Jahlica Kirnon (15.3 ppg) and veteran Nicole Works (8.8 ppg). Despite some major losses from last season’s roster including the graduation of perennial All-Star Kelsey Hodgson, the Capers remain an experienced, battle-tested team capable of bringing another AUS Championship back to Sydney.

UNB coach Jeff Speedy brings his most talented team to the play-offs seeking UNB’s first title since the 1998-99 season. The Varsity Reds stormed out to a dominant first half with an 8-1 record that saw the team ranked as high as #5 in the CIS. The Reds boast the country’s highest scoring offense at 82.0 points per game fuelled by their transition game, full court press, and the return of guard Leah Corby (14.4 ppg) for her final season of eligibility. Thriving in this offense along with Corby are stalwart post Amanda Sharpe (19.7 ppg/7.8 rpg) and likely conference Rookie of the Year Claire Colborne (18.6 ppg).

Coach Speedy’s team lost some of its luster after the Christmas break as the team struggled through a three game losing streak in January and closed the season with decisive losses at St. FX (98-69) and Cape Breton (74-60). The 1-2-1-1 zone press that served the Reds so well during the first semester became less effective as teams adjusted to it and, after a stellar start to her rookie season, Colborne’s productivity has tailed off of late as she draws more attention from defenders. Of particular concern to the Reds may be the difficulties they experienced against potential semi-final opponent St. FX who won three of four games from the Reds including 98-69 and 91-73 thrashings on the road.

Having just missed a first round tournament bye (five four point wins to six for UNB), the 14-6 St. FX X-women enter the AUS tournament capable of bringing a banner of their own to Antigonish matching their rugby counterparts. Although inconsistent at times, the X-Women finished with the fourth highest scoring offense in the CIS at 74.8 ppg. During those spans in which they struggle to score, their trademark pressure defense in both the full and half court enables the X-Women to remain competitive while also facilitating several impressive second half comebacks.

The X-Women roster includes four players averaging double figures in scoring including Kirsten Jones (11.0 ppg), post Donisha Young (11.2), Sheryl Chisholm (13.4), and fifth year senior Ashley Stephen (12.6 ppg). Aside from her offensive contributions, Stephen’s rebounding (8.6), leadership, and perpetual hustle are invaluable to St. FX’s frenetic, up-tempo style. Under-rated guard Victoria Anderson’s on ball defense is also pivotal in spearheading the team’s overall defense. If X can get by first round opponent St. Mary’s, a team they swept in two competitive games during the season, they should enter a semi-final date with UNB brimming with confidence having taken three of four games from the Reds during the season.

Tournament hosts Memorial Seahawks will see their prospects of winning an eighth conference crown boosted by the home court advantage but whether or not the home court can overcome the team’s inconsistency remains to be seen. The Seahawks profile includes wins over every other tournament team including splits with Cape Breton, St. FX, and first-round opponent Acadia to end the season last weekend in Wolfville. A win over the Axewomen could set up a semi-final game against Cape Breton with whom Memorial has combined to win 10 of the last conference titles including nine straight.

The Seahawks are lead by third year guard Grace Fishbein (16.7 ppg/6.0 rpg), post Ally Forsey (14.2 ppg/8.2 rpg), and senior guard Brittany Dalton (10.0 ppg/6.5 rpg). The trio of Fishbein, Forsey, and Dalton, who has battled a knee injury all season, hold the key to the Seahawk’s fortunes and Dalton’s ability to play through her injury will go a long way in determining if Memorial can hold serve at home.

After a 1-4 start to the season, coach Bev Greenlaw’s fifth seeded Acadia Axewomen enter the play-offs having won seven of their last ten games. It is no coincidence that Acadia’s second half surge occurred during a similar surge by forward Abbey Duinker (12.0 ppg/6.0 rpg) as she recovered from early season injury. At 6-3, Duinker is a defensive challenge due to her ability to battle in the post while also having the quickness and foot work to step out on the perimeter with range to the three point line. As good as Abbey has been, it is her sister Emma who is the main catalyst for the Axewomen leading the team in scoring (18.8 ppg) and rebounding (7.4rpg). Rookie Kristy Moore (13.2 ppg) gives Acadia a third offensive threat as the school seeks its first championship since winning the very first AUS women’s basketball title at the end of the 1951-1952 season.

Taking advantage of a rebuilding season by both the Dalhousie Tigers and UEPI Panthers, the sixth-seeded St. Mary’s Huskies have an opportunity to atone for a disappointing regular season if they can mirror last year’s play-off run to the championship game. Having upset Memorial and then battling Cape Breton in the 2010 championship game, the Huskies were widely expected to ride the superb talent of second year guard Justine Colley to the top of the AUS standings this season. Colley lived up to expectations leading the CIS in scoring (25.8 ppg) and tying Kelsey Hodgson’s AUS record for points in a single season. She also contributed 6.6 rebounds from the guard position while dishing out 100 assists. Colley’s ability to penetrate is complimented by the shooting prowess of Robbi Daley (11.3 ppg) and post Susanne Canvin (12.2 ppg/10.5 rpg). Colley’s wizardry and the post presence of UPEI transfer Canvin, the fourth leading rebounder in the CIS, could be enough to send the Huskies to another play-off upset or two (or three).

Dave Chafe lives in Newfoundland and played basketball for the Memorial Seahawks. Follow us on twitter _sportstream_.