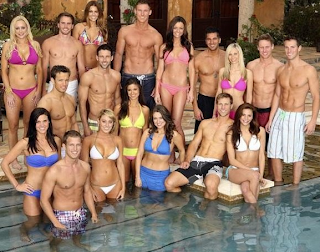 Just when you think Bachelor Pad can’t sink to a new low, it does! Yes, I’d almost forgotten about last season’s wet, sloppy kissing contest. I think the germaphobe in me had blocked it from my memory. But apparently it was not only a popular challenge with viewers last season, the contestants themselves were totally into it! So producers brought it back, of course, and I’m pretty sure it was even sluttier than last time. (I’m lookin’ at you, Blake.)

Before I give you a detailed recap of just how much tongue everyone used, though, let’s talk about the misleading editing on this show. Last week’s episode cut to black immediately after Chris Harrison announced Kasey’s name. It was so abrupt that some viewers didn’t even know who’d been eliminated. So I assumed that they were saving the really juicy drama for this week’s episode. I wanted to see shouting, threats of violence and insults! I got a rather cordial speech from Jake about how people need to realize it’s time to break up the power couples. And it got worse! “Kasey, amazing meeting you,” he said, and “Vienna, my apologies — in my heart, you’re forgiven.” Wow, way to take a few people with you, Jake.

And with that, Jake’s run on Bachelor Pad (and hopefully on this whole franchise, and on television in general) was complete. His goal was never to win the money. He says it was to make peace with Vienna. Common sense says it was to rehab his image because he’s a tightly wound control freak with psychopathic tendencies and an underlying rage issue. But, did he achieve his goal? I sure don’t like him, but he certainly played the good guy role well and Vienna makes it very easy to see him in it. I’d say Jake got what he came for.

Finally, it was the moment everyone had been waiting for – the kissing contest! I think you can tell a lot about people based on how they reacted to this news. Erica and Melissa were thrilled. Michelle pulled herself from the competition so she could set a good example for her daughter. Oh, Michelle. My bell. While you’re doing a pretty good job of making sure you get a more flattering edit than you did on The Bachelor, setting a good example for your daughter should probably include things like, oh I don’t know, not being a reality TV star or going by the name “Michelle Money”. Just a thought.

First the men had to kiss the ladies, which was awkward for a few people. Most people – even William, who let’s face it, doesn’t seem like the brightest of bulbs – were respectful of the fact that Holly’s ex-fiancee was standing right there and didn’t go all out on that kiss. And the guys (except for Kasey, obvs) just gave Vienna a peck. And then there was Blake. He didn’t just kiss every girl, he seemed to be checking for cavities with his tongue. It was so gross! The man is a dentist! He has to see patients like, every day! Isn’t he going to be embarrassed? Ewwww! I officially can’t stand Blake.

Next the ladies were up, and Ella immediately went all in. So did Erica, only it was way sloppier. Holly planted a big one on her lovesick ex-fiancee, but then planted an even bigger, longer one on Blake. Stay klassy, Holly! All the women hit a bump in the road when it came to Kasey, though, since apparently he’d skipped the mouthwash station in the voting room – the consensus was that dude had really bad breath.

Ella and Blake (Or Blech, as I call him) won the kissing contest and they each got to select one person for a romantic date. Ella chose Kirk, her partner in the house. And with that, I might actually have a couple to root for.

Look, I get it – I make fun of Kirk a lot for beating mold. I got pretty excited when he told the story again last night. But he seems relatively (as in, by Bachelor Pad standards) nice and normal, Ella seems very sweet, and I’d like to see them win. I mean, what stories! He beat mold, she escaped becoming the next Dexter Morgan (or as far as we know, she did). He needs the money to pay for medical bills, she wants to buy a house for her and her son and has some pipe dreams about setting up a foundation for battered women. (Sorry Ella, but if you work with Kirk you’ll end up with $125,000 before taxes. I don’t think that’s charity-starting money.)

Ella got to drive a shiny red car for their date, and then after dinner they had a romantic hot air balloon ride (where they kissed!). I thought it was a pretty awesome date.

How To Lose Friends and Alienate People

The second romantic date was not as sweet and innocent as Ella and Kirk’s. When Blake won the competition, Melissa assumed that as his partner she’d be taken on said outing and given the rose for safety. But she’s Melissa, and she thought wrong. Sure, Blake knew she’d have a major freakout if he didn’t invite her. And he knew that inviting Holly would seriously upset Stag. But Blake only cares about what he wants, which is to get into Holly’s pants. So he invited Holly on the date.

Was Melissa ever mad! After all, you guys, she did her hair and nails just for the date! Melissa stormed upstairs, locked herself in the bathroom and moaned to resident Bachelor Pad therapist Michelle about how unfair it all was. Then she stormed around the house acting crazy. It was basically a lesson in how not to act if you want to have friends, a boyfriend, or probably even a pet. First she told Stag that Holly obviously doesn’t give a **** about him. Then she told Holly that she’s a skank, or something implying that. Then she stormed around the house looking for Blake, until she finally found him, and, and…

…and you’re going to have to hold that thought, Holly, because “I got…another forty seconds…and then I will definitely talk to you.”

Yes, the dentist that makes Jennifer Aniston’s character in Horrible Bosses look like a saint was brushing his teeth and couldn’t be interrupted. Not even for another hissy fit from Melissa.

The next day, Blake and Holly jetted off for a romantic ski trip. They thought it was fun, but personally I’d way rather drive a fancy car, eat pizza and go on a hot air balloon ride. But I’m also not a fan of snow. Or of Blake. Anyway, after a day of rolling around in the snow, Blake and Holly kiss and decide to stay overnight at the resort. Meanwhile, poor Stag is at home wallowing in sadness and heartbreak.

Poor Stag. While I’m incredibly tired of hearing him talk about his feelings, I feel SO bad for the guy. This awful Holly girl is all kinds of leading him on. Choose! Blake OR Stag, you can’t have both! Holly acts like she wants Stag, but then stomps on his heart by telling him that she kissed Blake. God, I really can’t stand this girl. Naturally, she resorted to her one and only line of defense – “You broke up with me, Michael.” Oh, sweetheart. Way to gloss over the fact that he dumped you because you called off your wedding. A person just doesn’t bounce back from that kind of thing.

In the midst of all the Stag/Holly melodrama, and the ongoing Melissa melodrama, people still had to vote. The guys would vote out one girl, and the girls would vote out on guy. It seemed pretty clear that Melissa was the girl going home – there just weren’t enough votes to take down Vienna, and everyone had had it with Melissa’s psycho behavior. Meanwhile, Kasey was trying to convince all the women to vote out William instead of him. “I’m not trying to sell a story,” he told Ella and Kirk, “but just know that the money is necessary for my grandma to live.” Wow, real believable, Kasey.

And, of course, both Vienna and Kasey lived to see another day. The time to vote out this “Power Couple” was last week, and now it might be too late. Barf. If those two win the money, I will be so disgusted. Anyway, that meant William and Melissa were sent packing. We didn’t see much of William on Bachelor Pad – he certainly didn’t live up to the level of idiocy he displayed on The Bachelorette. Meanwhile, Melissa proved that she’s just as crazy (or even crazier) than she seemed on her original season. So long, folks! Hope ya didn’t catch mono!