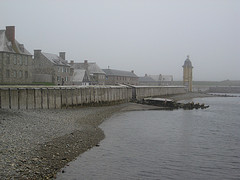 On a foggy day in Cape Breton, my family and I stepped back in time to the year 1744. Actually, we drove there – to Louisbourg. After parking the car we went to the Parks Canada info centre where we jumped on a bus that took us to the largest re-constructed 18th century town in North America. Our curiosity was piqued on the bus ride for what was beyond the fog and then the town slowly appeared into view.

At the gate, we were greeted by an armed soldier who questioned the intention of our visit. This playful interpreter asked us what was the purpose of our trip, if we were English or French, even if we were spies (I’ll never tell). 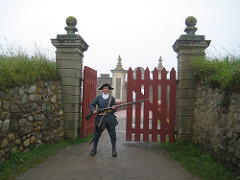 I still think my daughter thought the soldier was serious.

Once on the other side of the gate of the fortress, it was clear that you could spend a day at this impressive site. Friendly costumed interpreters smiled for pictures or said hello as they walked by. They also welcomed onlookers to watch them do tasks such as making fishing nets.

In 1744, the fortress was an important seaport for France. A thriving fishing industry and trade made Louisbourg a stronghold in what is now Atlantic Canada. At that time the soldiers’ rations over four days were: 4 oz of salt fish, 4 oz of vegetables, and 6 pounds of bread. 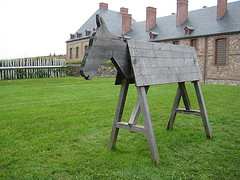 These men worked a 24 hour watch (usually without any sleep) and then had 48 hours off. During their free time they’d hunt or fish (probably for more food :)) As many of the soldiers were criminals, Louisbourg was a lot better than prison in France. To these men, life as a soldier was better than prison. At least as soldier they had a roof over their head and food to eat. If they stepped out of line, they had to sit on a wooden horse with their hands tied and sacks tied to their legs. This was a form of humiliation because they’d be in clear view of everyone.

By 1760, Louisbourg lay in English hands and its fortification, destroyed. Fortunately, the French were meticulous record keepers because when the fortress was being re-constructed beginning in the 1960’s, there were 750,000 documents to sift through. The re-construction was a massive undertaking which included archeological digs etc to re-build everything as a carbon-copy of the original. Cape Breton miners were enlisted in the project for their valuable skills. 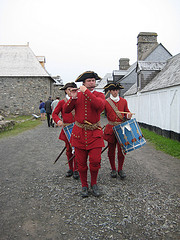 It was time well spent in this 18th century town. By late afternoon we had to jump into the car and set up camp in Broad Cove but we all said we’d like to go visit again someday.

See more pictures of Fortress of Louisbourg on Flickr.

Back to the Future at Fortress of Louisbourg
https://haligonia.ca/back-to-the-future-at-fortress-of-louisbourg-5125/