Meet Bailey Weggins (M): She’s a thirty something true-crime writer and amateur sleuth. She lives in Manhattan in a great apartment that she inherited after her first marriage. Bailey has worked at a variety of top pop culture magazines that specialize in celebrity gossip, paparazzi photos, and the inevitable legal problems celebrities find themselves in.
In her most current adventure she is working at Buzz magazine whose claim to fame is an entire division devoted to celebrity gossip. Bailey gets herself invited to a weekend at a music mogul’s country place where she once again comes across a body. This perfect body is that of Devon Barr, supermodel, singer and general pain! 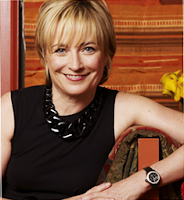 Bailey is the creation of Kate White, the editor-in-chief of Cosmopolitan magazine. This current adventure is the sixth in the series and is long overdue for its many fans. Bailey’s world (and I surmise Kate White’s as well) takes us behind the scenes into Manhattan’s hottest and trendiest spots, fashions, entertainment, and glamour. Bailey does not live in that world the same way Carrie Bradshaw did but she is certainly well poised to report on its many details.
If you want to start at the beginning with this series (always my preference) then start with If Looks Could Kill (M):

“White, editor-in-chief at Cosmopolitan, captures all the hype and cattiness of the magazine world and offers an intriguing mystery as well. Her sleuth is Bailey Weggins, a thirtysomething feature writer for Gloss magazine, specializing in crime stories. Bailey’s career has been built in part on loyalty to Cat Jones, her capable, beautiful, bitchy boss. So when Cat wants Bailey to find out who murdered her nanny, Bailey feels obligated to try. Then Bailey learns that the intended victim was Cat herself. Unlike in many mysteries, where the crime is obviously too complex for an amateur to solve, this puzzle manages to be challenging but not patently out of Bailey’s range. In fact, readers will nervously follow the clues right along with the heroine. White is also very good at painting her world–the life of a single woman in high-powered New York–and this glamorous setting should attract a certain type of young woman reader, just the type who would read a magazine called Gloss.” – Booklist