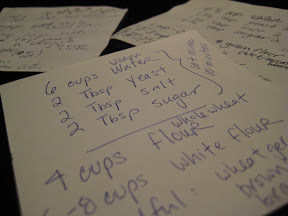 It’s been exactly one entire year that I’ve been baking bread. One whole big fat year of not bringing home the store made stuff. My mother in law taught me, then I was guided along by my father and uncle. I make my bread the traditional way, I don’t use a bread maker. I use good ol’ elbow grease.

I’m more and more surprised about how many people make their own bread. Once I was told that “men make the nicest bread because they knead it better.” Hmmm. Them’s fight’n words!

After a year of trial and error, I honestly think my ego would take a beating if I bought a loaf at the store. I take such pride in my bread making. It’s usually different every time. A handful of oatmeal or wheat germ or flax seed. Whatever is in the cupboard at the time. I love the creativity and simplicity of bread making.

My grandfather had a bakery near Bedford, Nova Scotia and he was well known for his bread. My uncle, who worked in the bakery alongside him, often gives me wonderful advise. When I was a young girl coming home from school, my father would just be taking bread out of the oven. Despite his warnings to never to cut into a warm loaf of bread, I’d cut into it anyway. Absolute heaven. 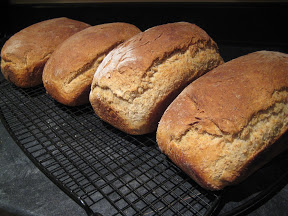 As I sit here typing, I have dough rising. In a few minutes I’ll put it into pans to and put them in the oven. When the aroma is lofting throughout the house, the kids will appear. My daughter will make the margarine out of the fridge and get the Grohmann bread knife ready. The bread will be minutes old and still warm from the oven when the first slices are devoured. I won’t be telling my kids to wait until the bread is cooled before slicing. No way, I’ll be sitting in the kitchen eating a slice along with them.

Baking Bread, One Year at a Time
https://haligonia.ca/baking-bread-one-year-at-a-time-2755/