Sometimes, when you can’t seem to find Lent, Lent finds you.

Knowing me means knowing that I love the big two liturgical seasons in the church calendar. I didn’t grow up in a church that particularly focused on the liturgical calendar however we still intentionally entered into Lent and Advent. We participated in in our desire to draw nearer to God during these seasons. I remember my mom in particular living out these seasons in beautiful worship and obedience. I fell in love with them first because of how my mother was living out her faith, and then again as I practised living out these seasons deliberately myself.

I have lived out Lent in many iterations. I have given up both physical things and bad habits. I’ve adopted good, spiritual practices. I’ve expressed my freedom in Christ by choosing to change absolutely nothing. For the past few years especially, I’ve approached Lent with the anticipation that I approach every well-loved season with, expecting to encounter God all over again, even in the darkness (whether that darkness is manufactured or experienced) that Lent always seems to bring.

This year, however, I’ve really been struggling.

Maybe everyone gets to say that about Lent. Or maybe that’s kind of the point? Time spent in the desert (40 years were the Israelites wandering the desert in the Old Testament of the Bible; 40 days was Jesus in the desert fasting in the New Testament) doesn’t sound all that inviting. Metaphorical deserts are probably even less inviting (says someone who has never really been in a real desert).

Perhaps the real problem is that my practice of Lent has been less than deliberate this year. I’m being sucked into the desert rather than purposefully entering it, which makes me a little defensive if I’m honest. I’d rather choose to enter that place willingly, rather than find myself there. (Wouldn’t we all?).

For most people, Lent in synonymous with fasting. I wondered if I should fast. I prayed about fasting. But I felt like I decidedly should not fast.

While I have no doubt that God can help with the healing I am working towards, I also knew it would be unhealthy for me to spiritualize my current relationship to food. Instead, I felt challenged to try to get my head to a healthier place about my body.

It clearly wasn’t working though, because I got an ulcer. All of a sudden, my stomach was causing me all sorts of pain and I had to learn how to feed it to avoid the pain. I was no longer feeding myself to look a certain way. First, when I thought I had a stomach bug, I was feeding myself for that. Eventually, when I realized what was going on, I was able to know that filling my stomach was actually the best thing I could do. I could no longer go hungry because going hungry would cause the pain to start again.

Ironically, what I needed during Lent was the opposite of fasting. I needed just to eat, without feeling condemned for it. I needed to feel a different kind of hunger. I needed to feed my heart instead of starve it. I needed to see myself through new eyes. I needed a reset to the pattern I was in. And when I couldn’t do it myself, it was done for me.

Do you not know that your bodies are temples of the Holy Spirit, who is in you, whom you have received from God? You are not your own; you were bought at a price. Therefore honor God with your bodies. 1 Corinthains 6:19-20

I’m beginning to heal physically. And mentally too. Now, I think, my Lenten challenge is to enter into a spiritual healing. My ulcer put a stop to all my habits, including the spiritual practices I had well in place for over a year.

I’m not out of the desert yet.

Let the king be enthralled by your beauty; honour him, for he is your lord. Psalm 45:11

Lent is a practice, not a perfect.

As The Tree Settles

We put the tree up last night. While it was only December 7th, it felt incredibly late to me. I have been stressing about this tree, worrying that we... 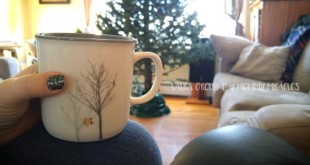 As The Tree Settles

We put the tree up last night. While it was only December 7th, it felt incredibly late to me. I have been stressing about this tree, worrying that we...