Based on the opinions of overbooked.org, The Globe and Mail, Quill and Quire and The Reader, these are amongst the best biographies published in 2010.

Northern Light: the enduring mystery of Tom Thomson and the woman who loved him
by Roy MacGregor

“Roy MacGregor’s lifelong fascination with Tom Thomson first led him to write Canoe Lake, a novel inspired by a distant relative’s affair with one of Canada’s greatest painters. Now, MacGregor breaks new ground, re-examining the mysteries of Thomson’s life, loves and violent death in the definitive non-fiction account. Why does a man who died almost a century ago and painted relatively little still have such a grip on our imagination?” – publisher

Conversations With Myself
by Nelson Mandela

“Nelson Mandela has written almost every day of his long life (he’s now 91 years old): notebooks, jottings, drafts of letters to heads of state; and perhaps most movingly of all, letters from his long imprisonment on Robben Island, most of which, tragically, were never passed on to their recipients. Conversations with Myself is a very personal book—a book of private thoughts and lessons learned; but, as we have come to expect from the great man, the sense of hope and gentle wisdom that shines from these letters and diaries make this a book for everyone—a chance to share Mandela’s recollections of a long life, fully lived.” – publisher

Mordecai: the life and times
by Charles Foran

“Mordecai Richler won multiple Governor General’s Literary Awards, the Giller Prize, the Commonwealth Writers’ Prize, among others, as well as many awards for his children’s books. He also wrote Oscar-nominated screenplays. His influence was larger than life in Canada and abroad. In Mordecai, award-winning novelist and journalist Charlie Foran brings to the page the richness of Mordecai’s life as young bohemian, irreverent writer, passionate and controversial Canadian, loyal friend and deeply romantic lover. He explores Mordecai’s distraught childhood, and gives us the “portrait of a marriage” — the lifelong love affair with Florence, with Mordecai as beloved father of five. The portrait is alive and intimate — warts and all.” – publisher

“Patti Smith would evolve as a poet and performer, and Robert Mapplethorpe would direct his highly provocative style toward photography. Bound in innocence and enthusiasm, they traversed the city from Coney Island to Forty-second Street, and eventually to the celebrated round table of Max’s Kansas City, where the Andy Warhol contingent held court. In 1969, the pair set up camp at the Hotel Chelsea and soon entered a community of the famous and infamous—the influential artists of the day and the colorful fringe. It was a time of heightened awareness, when the worlds of poetry, rock and roll, art, and sexual politics were colliding and exploding. In this milieu, two kids made a pact to take care of each other. Scrappy, romantic, committed to create, and fueled by their mutual dreams and drives, they would prod and provide for one another during the hungry years.” – publisher

The Publisher: Henry Luce and his American century
by Alan Brinkley 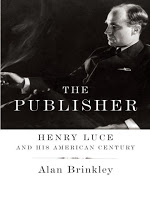 “Brinkley shows how Luce reinvented the magazine industry in just a decade. The appeal of Life seemingly cut across the lines of race, class, and gender. Luce himself wielded influence hitherto unknown among journalists. By the early 1940s, he had come to see his magazines as vehicles to advocate for America’s involvement in the escalating international crisis, in the process popularizing the phrase “World War II.” In spite of Luce’s great success, happiness eluded him. His second marriage—to the glamorous playwright, politician, and diplomat Clare Boothe—was a shambles. Luce spent his later years in isolation, consumed at times with conspiracy theories and peculiar vendettas.” – publisher