The winners of the 2010 Doug Wright Awards have been chosen.

The Doug Wright Awards were established in 2004 to honour the legacy of the late, great Doug Wright by recognizing the best in Canadian comics and graphic novels.

The prize is awarded annually to the author of the best Canadian work and the most promising talent published in English in the cartooning medium. Nominated works must be published in Canada in the calendar year for which the awards are presented. To be eligible, a work must be a first edition full length or collection, written by a Canadian citizen or a permanent resident of Canada 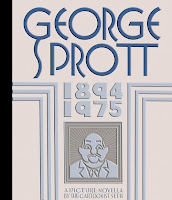 “Celebrated cartoonist and New Yorker cover artist Seth gives us the fictional life of George Sprott. On the surface, George seems a charming, foolish old man–but who is he? And who was he? Told as a patchwork tale, we come to know George, piece by piece, in a series of “interviews”, flashbacks and personal reminiscences. It is a story about time, identity, loss, and the pervasiveness of memory. Though ultimately this is the story of a man’s death, Seth leavens it with humor, restraint and a light touch.” ~publisher

The annual award recognizes the experimental and non-narrative efforts of Canadian cartoonists, including sketchbook material and single-panel works. As with the two major awards, eligibility is limited to a first edition full length or collected work, written by a Canadian citizen or a permanent resident of Canada. 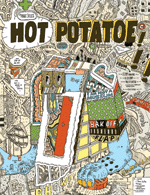 “Marc Bell’s HOT POTATOE seamlessly combines decade-plus comics activities with a lifelong devotion to, as Bell calls it, “Fine Ahtwerks.” Part art monograph, part comics collection, HOT POTATOE is filled with mixed media cardboard constructions, watercoloured drawings, altered found texts and Bell’s most intense, dizzying comics from the contemporary avant-garde comics anthologies – Kramers Ergot and The Ganzfeld. Bell’s works have their roots in draftsmanship, typography and old-fashioned gags, but morph into assemblages that connect his images into real space. His comics are funny, seat-of-the pants narratives that give the characters an inner-life.

Represented by the Adam Baumgold Gallery in Manhattan, Bell is one of the leading lights in the new emphasis on drawing in the art world. He comes on like a stepchild of R. Crumb, Ray Johnson and Basquiat; armed with a dashing and looping rapidograph.” ~publisher