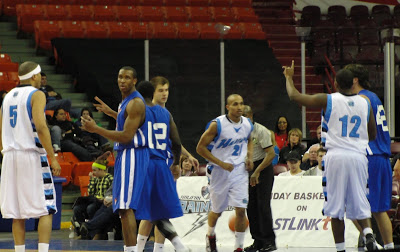 RAINMEN 119, FROST HEAVES 109
A big bucket from Gary "G Smooth" Ervin last night helped seal the tight game between the Halifax Rainmen and the Vermont Frost Heaves at the Halifax Metro Centre.  The arch rivals went bucket for bucket up until the last few minutes in regulation when leading scorer Tony Bennett and Gary Ervin made some clutch baskets.  Saturday was also the debut of Rainmen’s newest faces, Marc Mazur, DeAndre Thomas and Antwan "Antifreeze" Dobie.  Marc Mazur got the start at centre and put up 14 pts and 5 rebounds in 32 minutes of play.
Both teams shot the ball well, shooting 55+% from the field.  Vermont’s Troy Jackson and Jawan Bailey helped keep the game competitive and combined for 42 of Vermont’s 109 points.
For the Rainmen, Tony Bennett had an impressive night, slashing to the basket at every opportunity he could.  Tony Bennett finished with 28 points on 10 of 20 shooting.  Desmond "Moneyball" Ferguson was money with the three ball as well, nailing six threes.
The Halifax Rainmen and Rogers (sponsor of the Halifax Rainmen) helped raise $23,800 for Haiti disaster relief efforts as the communications company donated $200 for each Rainmen point scored last night.
Shaun "Mavs" Gillis and Ryan Dickison’s Player of the Game
Desmond Ferguson – 23 pts, 6 threes, 5 rebounds and 4 steals
Romy Aquino’s Player of the Game
Eric Crookshank – 22 pts, 15 rebounds, 4 assists
Hat-tip to the Frost Heaves
Jawan Bailey – 23 points, 8 rebounds, 3 blocks, 1 steal

Next up, the Rainmen take on the Lawton-Fort Sill Cavalry this Friday evening, tune in to Haligonia.ca for live online coverage!