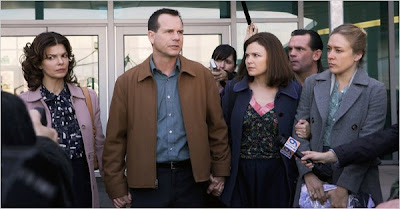 Wow, what an ending, right?

If you haven’t seen the season five finale of HBO’s Big Love, I’d advise you to stop reading now. Don’t spoil it for yourself. If you’ve never watched the series, check it out – though reviews of the fourth season were weak, the series overall was incredibly thought provoking, well acted, morally ambiguous, creative, intelligent and fascinating. It’s one of those shows you don’t easily forget, and I thought the ending perfectly suited the series as a whole.

Now, for those of you who saw last night’s show – we have so much to talk about.

Instead of reviewing each episode of Big Love‘s final season (which I’d never done), I wrote a review of the fifth season up until the penultimate episode last week. Then, I said “I’ve long wondered if the series would end with Bill having a heart attack or something, but the idea that he could end up serving twenty years in prison for statutory rape is brilliant.” Well, my original intuition wasn’t too far off – and in all truth, it did briefly cross my mind that Bill could also be assassinated.

Because of those fleeting thoughts, I can’t say I was shocked when Bill was killed at the tail end of the episode. But that didn’t make it any less brilliant. Until then, I’d been frustrated with the finale. It seemed like everyone was stuck. No one changed from who they’d been all along. Even if Bill went to jail, he’d still have a hold over these women. The fact that Bill died walks the perfect tightrope that this show has always managed to balance on – no, Bill’s wives never broke free of him in the sense that they left him or rebelled against what he thought was best for the family. But they found freedom in his death. It was a bittersweet moment.

OK, let’s talk about this from the beginning. Alby was still in jail, with his brutally annoying mother hijacking the airwaves begging for his release. Ha! Alby Grant is not a flight risk like I am not totally creeped out by his hair. Which is to say, he very much is. Meanwhile, Bill’s own jail time was still looming. Pleading to a lesser charge of polygamy would not cut it – he could either plead innocent, that his relationship with Margene was not statutory rape (and really, it wasn’t) and go to prison for twenty years, or plead guilty (something that, I think, would be impossible for Bill to do) and bargain for just a few years in jail.

This meant so many things to so many people. For Barb and Margene, it meant contemplating their selves outside of Bill. Margie thought about overseas humanitarian work. Barb planned to get babtized in her new, reform church where she’d be accepted as a priesthood holder. And Nicki panicked at the thought of a life on her own.

Poor, damaged Nicki. In these last few episodes, it became clear that she has not really changed over the past five years. Her clothes and hair, sure. But she’s still deeply insecure, vindictive, and cruel. But she’s also very, very loyal. You hate her, but then you realize you can’t really hate her. It’s not her fault she’s broken.

As the finale went on, Bill took what seemed to be his last opportunity to ruffle feathers in government and put forward a motion to legalize polygamy. It was a daring move, and one that wasn’t entirely without merit – he’s right, by cutting polygamists off from mainstream society they are banishing women to a place where they have no power, no voices, no rights. But legalizing polygamy would obviously come with a plethora of problems, the largest one being, of course, that polygamy is inherently sexist. I’m not going to pretend that I can intelligently debate polygamy, because I can’t. It’s an incredibly complex subject that I’m not adequately informed of. But what I’m trying to say is, Bill’s motion to legalize polygamy was a grand last hurrah for the character of Bill Henrickson. It felt right that he would try to do this, because only he could. He was never really the “typical” polygamist. He tried to raise himself and his family up out of the landfill of Juniper Creek, and while he succeeded in some ways he failed in others. Big Love succeeded in not really taking a stand on polygamy, and the Henricksons themselves perfectly epitomized that.

In a small and sad scene, we saw Lois finally give into her dementia. She laid in Frank’s arms as he reminisced about their younger days, a small pile of pill bottles and syringes on the side table. It felt wrong – that Frank, who tortured Lois so, would share such sweet and tender final moments with her. But it was what she wanted. I took it that only Lois was going to die, not Frank, but it was never really made clear – because of the episode’s final events, we never got to see the family’s reaction.

Towards the end of the episode, I began to feel very disheartened. Barb chose not to go through with her baptism, which had been something I’d really wanted to see. Barb’s belief that she was a priesthood holder was such an important step for her character, even though it caused such a deep fracture in her marriage. Because, really, I’d wanted the show to end with Bill’s wives leaving him, one way or another. Barb is an intelligent woman. She followed Bill into polygamy basically against her will, because she was sick and she loved him. She entered into it at her most vulnerable time, and even though she loved her family it never felt right. I wanted her to find herself. When she chose not to be baptized in a church that truly accepted her, and instead returned to Bill’s conditional love at his church, I felt cheated. Add to that the fact that it looked like Bill was about to become the next prophet, what with the standing room only Easter service at his new church, and I felt really cheated.

But oh, was I in for a surprise.

Bill’s death wasn’t a surprise. When Carl approached him in the street, I knew something was up. As I said, I’d often wondered if Bill would die at the end of the series. There were so many ways it could happen – a heart attack due to stress, Alby, a crazy anti-polygamist. Carl wasn’t quite any of these things, but it made perfect sense. He’d never liked Bill, he’d never liked his wife’s friendship with Margene. He was a broken man who’d lost everything, and he blamed Bill for all of his problems.

While I never really liked Bill, I always respected that he wasn’t an inherently evil person. I’m glad he wasn’t killed in a feud with Alby, or because of his government goings-on. It was because he did something nice. He re-sodded a guy’s lawn, just like he’d promised. Of course he would re-sod Carl’s lawn after it was trampled during the election. That’s the kind of guy Bill is. It suited Bill, to be struck down during one of his finer moments.

The surprise, for me, were his final moments. As his wives rushed to his aid, I thought how incredibly unfair it all was. Bill got his way. He got his three perfect wives, who weren’t going to abandon his church or have successful lives outside the family. He was going to die with three devoted wives. But instead, he asked Barb to give him a blessing. Something he’d been so fiercely against. I won’t say his final words redeemed Bill in my eyes, but they came pretty damn close. He finally earned what I thought he hadn’t deserved for so long – the love of those three women.

Although Bill’s violent death was a tragic note to end on, the epilogue was uplifting. Barb, Nicki and Margene have finally broken free. They’ve finally found themselves outside of their identities as wives. Barb gave a blessing to her first grandchild, Sarah’s first baby. Margene was off to go on another international volunteer trip. Nicki was her same rude, but caring self. Everyone seemed happy, despite being sad.

Bill’s death, and Barb’s new role within the church brought Sarah back into the church and the family. Ben was looking comfortable with Heather, which left me hopeful that he’d abandoned the idea of polygamy for himself. Cara Lynn was still there, looking happy and healthy with her hair out of that horrible braid. They were all still a family, but they were individuals now, too. Like everything in Big Love, that came at a price.

I thought the finale was great, and I’m totally on board with Bill’s death and how it changed the family. What do you think? Was it too much? Were you hoping for a different outcome? Comment away, I need someone to discuss this with!