Since moving here in the summer of 1999, Neptune Theatre has produced a wide array of performances some years better than others. This year in particular has delivered some really fine performances and we’re only into the second show of the season on the main stage! Last week I was invited to the opening night performance of Bingo! 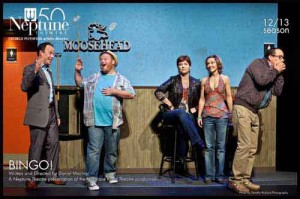 On the eve of their thirtieth high school reunion five classmates come together in a Cape Breton hotel to celebrate the past.  Some are happy to be back home while others see it as an obligation. A few have never left. As tears and liquor flow, decades of dirty laundry is aired and life is re-examined.   Don’t miss this funny, thought-provoking story of friendship, growing up, and the nice guy finally getting the girl. This presentation is a remount of the sold out Mulgrave Road Theatre production by renowned writer, director, actor and Sydney native Daniel MacIvor.

Cokebaby and I had a blast at this performance. Really, I couldn’t find fault in any bit of it. The set was simple yet perfect. Who hasn’t been to a hotel room that looks exactly like that? Or a small town bar emblazoned with the Mooseheads logo on the wall?

Above all else, the casting was absolutely brilliant. Each actor embraced their role and were true to life in so many ways. From the jock who really hasn’t changed, the best friend who’s the brunt of his aggression, to the ones who moved away and the ones who stayed behind. I have to give major props to Heather Rankin who really stole the show with her performance though. She was charming, sweet, funny, and a memorable character.

Overall, Bingo! is a hilarious yet touching play that is very relatable no matter if you’re from a small town or big city. So far, so good in the 50th anniversary at the Neptune Theatre. We’re really looking forward to the rest of the season.

About East Coast By Choice 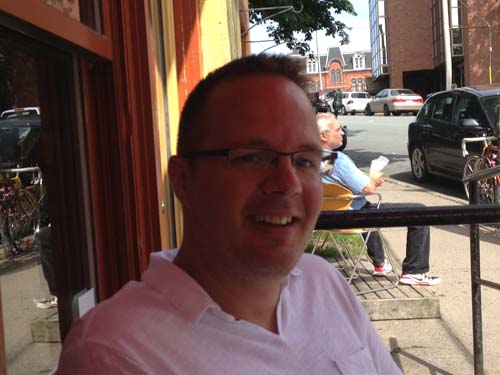