Last Friday, a friend and I went to The Bitter End on Argyle St. The night started out well enough- at my place we had guacamole and veggie chips and…several dirty martinis. When we finally made it out, we headed to The Bitter End for some for some late-night martinis and snacks.
When we arrived, it wasn’t too busy, so we scored two spots at the bar and got to work on the menu. The verdict- two vodka martinis w/ lots of olives, and a side of jelly worms. However, I have to say that it certainly wasn’t my favorite trip out. Now, I’m known to have a bit of attitude, and I certainly love a good laugh, but those boys at the bar…well, they went a little bit too far, to be honest. Dirty martinis certainly suited their dirty mouths.
Aaaannnyhow, on to the food. We put in our order for Calamari and Mussels, an order that I’ve had there before, and enjoyed. But this time? Not so much. Where the calamari used to be bite-sized, served with a yummy smokey tomato sauce, the new version was tasteless, and not a bit of crunch applied- it was an underwhelming batter with a Tzatsiki that matched.
Calamari w/ Tzatsiki 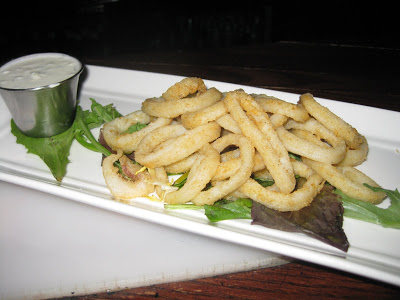 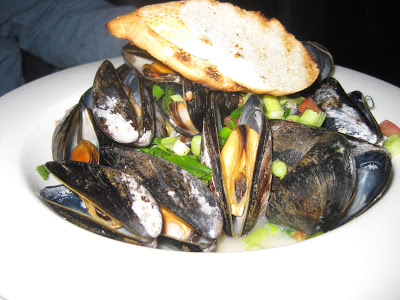 The mussels were OK. They were large, and pretty meaty, but altogether? Nothing to write home about…

Nope, this night at The Bitter End fell flat- the only highlights were the awesome company and the jelly worms. It was a pretty big bummer, as I’ve eaten there before and loved it for Friday night drinks, snacks and people watching. I haven’t entirely given up on this place however. The Greek Nachos still intrigue me, and I know they do a mean Saganaki, so I’ll be back to munch on those puppies in the future.

Bitter about The Bitter End
https://haligonia.ca/bitter-about-the-bitter-end-6430/