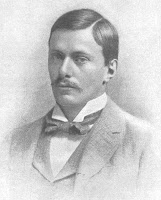 E.F. Benson was a prolific writer in his day (1867-1940) with dozens of novels, short stories and biographies to his credit. He was somewhat forgotten by readers with the exception of his ghost and science fiction stories. The 1980’s were good to Benson with the BBC production of his Mapp and Lucia.

With a wonderful cast – Prunella Scales (Fawlty Towers), Geraldine McEwan (Miss Marple) and Nigel Hawthorne (Yes Minister and The Madness of King George) – Miss Mapp and Mrs. Lucas (Lucia) were brought to life for another generation. Benson excelled at satirizing British society, gently mocking the upper class for their snobbishness and greed. Miss Mapp was the queen bee of Tilling until Lucia’s arrival. Lucia proved herself to be a worthy adversary and the battle for social dominance commenced.

On the heels of this success in 1991 came Desirable Residences and Other Stories, a collection of 26 of Benson’s short stories, some of which had been unpublished. Benson’s stories don’t follow a plot as such, but rather can be read as anecdotes illustrating and mocking society, Eccentrics rule the day as a pair of luckless bachelors invest in electric appliances to rid themselves of pesky female servants. Perhaps my favourite was The Case of Bertram Porter in which a hypochondriac’s preoccupations accelerate at a mind boggling rate. Although the stories, which are a send up of Edwardian and Georgian England, feel somewhat dated at times, human beings and their desire for status and recognition never changes.

Fans of Mapp and Lucia will be pleased to see them again in Desirable Residences. Dodo, another delightful Benson character makes an appearance in The Return of Dodo and Dodo’s Progress. In contrast to his gently mocking comic stories are his Spook Stories which are unsettling stories of suicides, apparitions and communication with the spirit world.

If you enjoyed the tone of the more recent Major Pettigrew’s Last Stand by Helen Simonson you might appreciate the novels of E.F. Benson. In Major Pettigrew’s Last Stand “When retired Major Pettigrew strikes up an unlikely friendship with Mrs. Ali, the Pakistani village shopkeeper, he is drawn out of his regimented world and forced to confront the realities of life in the twenty-first century. Brought together by a shared love of literature and the loss of their respective spouses, the Major and Mrs. Ali soon find their friendship on the cusp of blossoming into something more. But although the Major was actually born in Lahore, and Mrs. Ali was born in Cambridge, village society insists on embracing him as the quintessential local and her as a permanent foreigner. The Major has always taken special pride in the village, but will he be forced to choose between the place he calls home and a future with Mrs. Ali” – publisher

Fans of P.G. Wodehouse’s Jeeves and Wooster stories will appreciate the comedy in Benson’s stories. “In My Man Jeeves, affable, indolent Bertie Wooster and his precise, capable valet, Jeeves — the ever cool and capable gentleman’s gentleman Jeeves who pulls hapless Wooster’s fat from the fire time and again — weave themselves through a series of delightful adventures. But the adventures are almost beside the point: what the Jeeves stories are about is the relationship between these two men of very different classes and temperaments. Where Bertie is impetuous and feeble, Jeeves is cool-headed and poised. A motley clutch of buffoons accompanies Jeeves’s accounts of Wooster’s misunderstandings, gaffes, and backfiring plans.” – publisher

Blast from the Past! Desirable Residences and Other Stories by E.F. Benson
https://haligonia.ca/blast-from-the-past-desirable-residences-and-other-stories-by-ef-benson-37222/