There are a lot of books out and about the world of blogging. This I find a bit ironic since the very definition of blogging implies that it is on the web and not in paper forms.

Over the holidays I found myself reading not one but two books published from a blog. 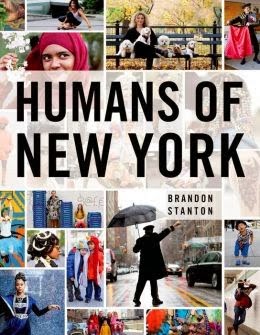 Humans of New York (M) by Brandon Stanton is a book that I had heard about but never realized it was based on a blog until I got my hands on it. They say that a picture says a thousand words, but the words attached to the photos are the things that “spoke” to me. An example of this is the photo of a man carrying flowers with the caption: “Sometimes, when I’m going home to see her, I think: “nobody should be this happy on a Tuesday.” The book has blown my mind away and I must admit I immediately signed up to receive the computer updates. The website, HumansofNewYork.com (known as HONY to its fans), has more than 2 million followers online and well deserves the praise it receives. Stanton is a 29 year old Georgia native who admits he is not a journalist and has never learned the technically correct way to use cameras. Stanton started taking photographs the summer of 2010 in an attempt to create a photographic census of NYC. And the city of a million stories just got another venue to tell its tales.

The other blog that came to my attention I was listening to on audio-book form over the holidays was Jenny Lawson’s Let’s Pretend This Never Happened (M). It was the perfect thing to listen to when I was stressed out wrapping gifts or cooking. I am going to quote what she said on her own blog about the book:

“I wrote a book and it only took me 11 years (shut up, Stephen King) You should probably go buy it right now, because it’s filled with awesomeness. And cocaine. But only if you hollow it out and fill it with your own cocaine. I’m not buying you cocaine. Because I love you. And that’s why you should buy my book.” I will warn you of two things, you will laugh out loud at her absurd life and that there is a lot swearing in this book. Lawson was born and raised in Wall, Texas, and the redneck comes through in her writing. Her father can only be called unbalanced person who is a professional taxidermist who created dead animal hand puppets. This upraising affected Lawson, and it show in her writing. An example of this is that she actually forgot that she had mailed herself a cobra! For more unexpected surprises read her book.

There is a whole other world out there in the blogosphere but some you can find on the shelves of you local library. Enjoy!

Clearly I didn’t think this through: the story of one tall girl’s impulsive, ill-conceived and borderline irresponsible life decisions (M) by Anna Goldfarb.

Written by blogger, Leanne Shirtliffe, Don’t Lick the Minivan and Other Things I Never Thought I’d say to My Kids (M) was not written first as a blog but since she is a blogger……