I had a crew of my serious food friends over for some good eats not too long ago. since all of us are devout worshipers of That Dutchman, and his culinary creation, Dragon’s Breath blue cheese, we were pumped when an article arrived in the Holiday 2008 edition of Occasions Magazine for Whipped Blue Cheesecake. Since the recipe was created to serve individual cheesecakes, I modified it make one big cake. I also tweaked the recipe slightly, replacing walnuts for pecans, and sauteing the pears in butter instead of poaching them in white wine.

As if the trifecta of pears, blue cheese and walnuts weren‘t enough, I added Belgian endive leaves for dipping in addition to some toasted baguette and multigrain and flax crackers. 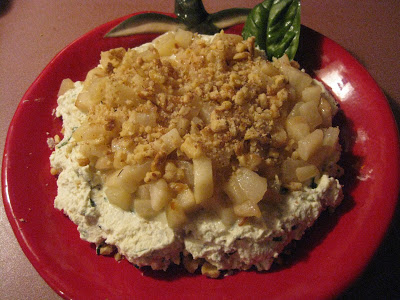 1. On medium heat, saute the pears in the butter until tender, and set aside to cool.
2. Whip the cream until soft peaks form.
3. In a separate bowl, mash the basil, cheese and S&P together.
4. Fold the whipped cream into the cheese mixture.
5. On a serving platter, arrange the walnuts to form a ‘crust’, saving 1/4 for the topping.
Cover this with the cheese mixture, then the cooled pears and sprinkle the remaining
walnuts.

And if that isn’t enough cheese- we had Fox Hill’s Fennugreek, an old cheddar that tasted like stinky feet, a divine white cheddar w/ apricots, and the rest of the Dragon’s Breath with a lovely bit of prosciutto. For dessert, we had a deeply dark chocolate fondue with fresh fruit. However, for the most part, I ended up dipping the toasted baguette into the pot. Never underestimate the tremor-inducing power of crunchy, buttery toasted baguette dripping with silky smooth bittersweet chocolate. 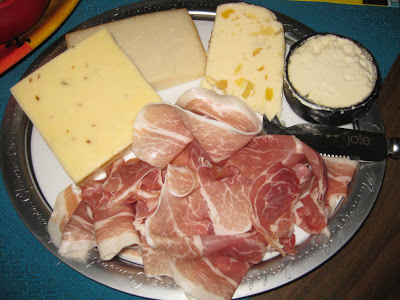