Just after midnight, people reported hearing a loud bang, followed by people calling for help from the basin. 2 people Swam to shore, and Landed near Clearwater seafoods, 3 others were removed from the boat by a Coast Guard inshore rescue craft.

Reports are the 31′ fiberglass boat struck One of the Navy’s Trot Bouys, Likely at at Jonquière Bank where HMCS Halifax was recently tied up, though earlier tweets indicated the survivors were clinging to Bedford Basin light buoy H45 in Position  44 42 25.3N,63 39 07.6W 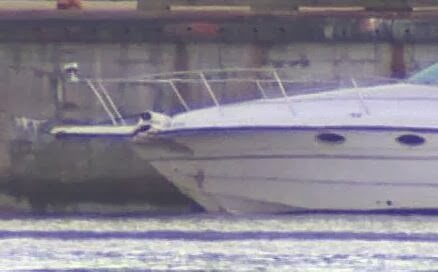 (Above) Damage to the boat, Now at BIO. Photo from Brett Ruskin via Twitter