For years Cokebaby and his male friends have been lamenting the lack of a place to get southern BBQ. Recently, within months of each other, two new restaurants that fit the bill opened up in the city. For the most part, I don’t post negative reviews here. If I don’t like a restaurant, you simply won’t find it among my food reviews. Unfortunately, one of the two in this comparison didn’t make the grade so please bear with me.

First up is Boneheads BBQ located in the South End on Barrington Street. It’s a tiny little spot tucked away near Point Pleasant Park. Simple decor, friendly staff, with food that’s stick to your ribs yummy. Cokebaby and I were waiting for another couple for dinner when we ordered some onion rings to start. Just as advertised they’re big, crispy, golden & hand battered ($5.49). Deep fried perfection.

When they arrived, one of the friends ordered the shredded BBQ chicken sandwich: smoked chicken pulled off the bone, served on a soft roll ($5.99).

Two of us, including me, had the Pulled Pork BBQ Plates: served with cornbread, cole slaw & two more sides of our choice ($13.99). I had the potato salad and pit beans. The entire meal was delicious but I wound up packing half of it for lunch the next day. I know, I know. Eyes bigger than belly. Honestly, I wasn’t a big fan of the cole slaw because it was kind of sweet but everyone else seemed to enjoy theirs.

Cokebaby went with the rib combo plate: half slab of pork back ribs plus your choice of one BBQ meat ($20.99). He chose pulled chicken with mac & cheese and dirty rice as his sides. Again, no complaints.

Other side offerings include: garden salad, hand cut fries, sweet potato chips and chili. At the table is a variety of delicious bottled sauces which are also sold separately. Although there’s plenty of pop and juices to choose from, we decided to go with Propellor Beer to wash it all down.

To have with leftovers the next day we took out a peach cobbler that’s served with vanilla ice cream and caramelized pecans ($3.99). It was simple but spectacular at the same time.

Overall, the pulled meats at Boneheads are far superior to Q’s. I’d argue the potato salad is as well unless you like crunchy bits of pepper in yours. 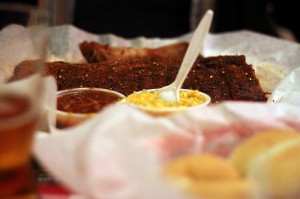 Next up: Q Smokehouse and Southern Barbecue (@Q_BBQ).

So, have you ever had a food service experience so bad that you’re kind of embarrassed for the people working behind the counter? Well, that’s how I felt coming out of the dinner experience at this establishment.

Right from the start, the setup for ordering food seems like it’s lacking proper flow. There’s a metal cordon to divert the queue. I had a feeling we were on the wrong side of it but the line had already formed and there was no signage to steer us. As a result we wound up too close to the tables so that patrons kept having to squeeze and push behind us in order to get to the cutlery and free pop refills station.

Then when we got to the front of the line we were promptly informed that they were out of chicken except for pulled chicken. It was just past seven o’clock and we were dining with Cokebaby’s sister and brother-in-law.

Since there were no other chicken option, I went with the pulled chicken sandwich ($9). Like Boneheads you get your choice of sides with your meals and I chose potato salad which tasted great but the peppers were very crunchy which kind of ruined the overall texture for me. My sister-in-law ordered a similar item, a po-boy sandwhich: Louisiana style all dressed with lettuce, tomato and mayonnaise, pickles and onion served with sweet potato fries ($9). As I mentioned already, the pulled meats at Boneheads is definitely tastier.

The guys had three beef ribs which includes corn bread, one sauce & two choices of sides ($13). The sweet potato fries were tasty. I didn’t sample the baked beans or fries, so I can’t compare them to Boneheads but the others were pleased with those sides. Other side options include: mac ‘n’ cheese, coleslaw, gravy, corn bread, sweet potato fries, grilled corn on the cob, and grilled onions & red peppers.

There’s only one bottle of a vinegar style sauce at the table along with ketchup. So sauce wise, I’d say Boneheads wins over Q’s because you’re able to add as much or as little as you want at the table.

Mixed drinks at Q’s are delicious though. They don’t have a stocked bar, like Boneheads, but they do make a fantastic concoction called a Lynchburg lemonade: house made sweet lemonade with a shot of Jack Daniels ($5.50). Otherwise, Garrison is the beer of choice here and they’ve got a couple brews on tap (14 oz. for $4.50).
Here’s where the story really starts to go downhill though. There are maybe seven tables in total that are occupied by the time we sit down, with only about three couples ahead of us in line. The wait for our food was far too long. Cokebaby’s brother-in-law went back for three refills of pop before we saw any sign of our food coming up.
It was a good half hour before Cokebaby was informed that they were out of beef ribs and it would take an additional 15 minute wait or they could offer full rack pork ribs (an upgrade to a $16 meal). He went with the latter and they gave a free pint of beer for the trouble. A few minutes later, the other couple  received their order.
Another 10 minutes pass. We inquire about our order. By all outward appearances it looks likethey have no idea what happened to the order. Some time later the other couple has finished their meal, with still no sign of ours. So we tell the staff that we’d like it packed to go. After probably another ten minutes, there’s still no sign of our order. At this point they’ve fully refunded the price of the meal.
Over an hour and a half after we placed our order, we finally received our meal. They even threw in Cokebaby’s beef ribs for the trouble. By the time we get home the sweet potato fries were soggy and had to be reheated. The cornbread was forgotten.
I do give them credit for trying to make up for the huge mistake. If they had turned it around quickly I might not have major reservations about going back. Although the ribs turned out to be tastier than at Boneheads, everything else was similar enough that I can’t see returning any time soon.