This is a guest blog post by Dalhousie SIM workterm student Richard Light: 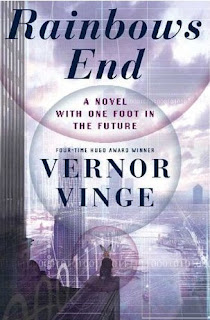 Vernor Vinge’s Rainbows End is a Hugo award-winning science fiction novel from 2007. Set in the 2025 the novel takes place in a future that is bizarre but also eerily plausible. This is due in large part to the author’s seamless weaving of detailed accounts of the fantastic 2020’s technology into the larger story.

The story itself is a new take on a person from the past waking in an unfamiliar world. In this case though, the main character, Robert Gu, does not travel through time or emerge from suspended animation. Instead he benefits from the miracles of modern science, which reverse much of the aging process while curing his Alzheimer’s, a disease that nearly killed him and wiped out years of his memory. Gu, who was once a renowned poet, is forced to come to terms with this brave new world. One aspect that is particularly difficult for Gu is embracing the smart clothing and contact lenses that most citizens wear. When people are “wearing” they see and interact with an augmented reality where computer graphics and interface are overlaid on the physical world.

Apart from having to come to terms with the new reality, the curmudgeonly Gu must also deal with re-starting high school, a family who has mixed feelings about his return, former academic rivals, and the fact that he has lost his poetical gifts. While Gu is forced to work out his personal life he is also coaxed in to a shadowy conspiracy that promises him great rewards (namely the return of once-great talent) but whose implications he does not understand.

Overall, Rainbows End is an engaging read. Occasionally Vinge gets a little too imaginative and it becomes difficult to completely understand some of his technological wonderments, but for the most part he is quite adept at bringing his vision of 2025 to life. It leaves the reader partly excited about the potential of the future and partly terrified of what the impact of technological overload means for humanity. Ultimately Vinge’s focus, like that of most good science fiction writers, is not on the technology but the characters and the plot. The technology and futuristic setting are fun but they are just the stage on which on an entertaining story is acted out. In this way Rainbows End does not just appeal to dedicated sci-fi readers but anyone who enjoys a good book.