I love Kate Morton. I can’t claim to have read all of her books but I couldn’t get enough of The Forgotten Garden when I read it in 2011. Morton’s stories have depth and width and you just sink into the literary world alongside the characters. When the opportunity came to read Kate Morton’s newest book, The Secret Keeper, I jumped at the opportunity. I was eager to be pulled into the story just as fiercely as I had been with The Forgotten Garden.

{For the record, I could never remember the novel’s name while I was reading it. When you read two books by the same author, one called The Forgotten Garden and one called The Secret Keeper, you kind of want to call the book The Secret Garden.}

The Secret Keeper is about a woman trying to piece together a family secret that she has kept for far too long. It is about a child who witnesses a crime and that same woman trying to determine what happened fifty years later. It is a book that dissects the secrets a family holds tightly while discovering the truths about the individuals behind those secrets.

Like all of Kate Morton’s books, The Secret Keeper is set agains a historical backdrop and it is long.

Do you want to hear my secret? It took me four months to read this book. Granted, it wasn’t really the writer’s fault, but it was the book’s fault. I had the pleasure of getting my hands on an Advanced Reading Copy of The Secret Keeper. Thankfully, the Advanced Reading Copy is not a hardcover book, but it was a paperback book, and for someone who pretty much only has a chance to read while breastfeeding, I find anything but an ebook hard to manage.

The truth is, The Secret Keeper does take some time to get into. Like many books, the storyline starts out intriguing  but without really knowing the characters or where the plot is heading, it can feel like you’re being dragged along for a few chapters. I think that this slow start is to be expected when reading books that weave through history while telling multiple stories. Unfortunately, I let these initial chapters drag on for months. Thankfully, the story picks up and draws you in once you get past the initial slowness.

As I read The Secret Keeper, I was struck by the stories. Each secret had its own story. Each character, a story. And the stories were all interconnected, yet hidden to even those closely knit characters. As readers, we all have our own story and we only ever really know our own. We can guess at the stories of others and we know our story gets tangled up in their’s, but we usually only grasp our own. In the novel, Dolly had no idea about Vivien’s actual story. She creates her own story to explain this other woman. And years later, Laurel tries hard to uncover these stories, but still knows so very little. As readers we are forced to ask how we see the stories of others. Are we blinded by the telling of our own story? Do we create stories to explain the lives of other people without truly searching for the truth? Or, do we try to uncover these secret tales to understand each other more? Do we recognize the role that other unknown characters play into our own story?

“Laurel knew quite a bit about keeping secrets. She also knew that was where the real people were found, hiding behind their black spots.” – The Secret Keeper

Kate Morton does many things well, and she proves it in The Secret Keeper. The reader is whisked through multiple generations and perspectives without getting lost. I became tied to the characters and invested in the storyline. I was dropped into this history and became involved in the romance and was tricked by the twists. And, finally, Morton crafted an ending that took my breath away and made every page turn worth it. The end of the book is so wonderful and engaging, I can forgive the slowness of the beginning. And on that note, I absolutely have to give The Secret Keeper a solid 4 out of 5.

Join us tonight (March 27th) at 9pm Eastern for a MomsReading book club discussion of The Secret Keeper. Discussion will be taking place on Facebook. Make sure you Like MomsReading to participate!

Did you read The Secret Keeper? I’d love to read your review! Link up below and grab the button (or link back here) so that others can join us! 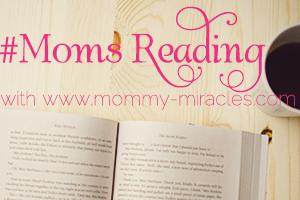 Join us next month on April 24th when we’ll be blogging and discussing The Light Between Oceans by M.L. Stedman. Click here to see all the updated MomsReading book club info.