Well, now that the garden no longer needs tending and before there’s call for snow shovelling, it seems like it might be a good time to catch up on some reading.

Fall is a big season in publishing and early November is chock-a-block with big name releases from your favourite authors. In the first week of November alone these anticipated bestsellers will big hitting the shelves: Even the Dogs in the Wild by Ian Rankin (a new Inspector Rebus novel), The Bazaar of Bad Dreams by Stephen King,  Stars of Fortune by Nora Roberts (the first book in a new trilogy) and Avenue of Mysteries by John Irving. Looking for some reading outside the blockbusters? Here’s a few books to look for this month.

Mountain City Girls: The McGarrigle Family Album by Jane and Anna McGarrigle (November 10): A peek into the family life of the great Canadian music family that brought us not only Kate and Anna Mcgarrigle but also Rufus and Martha Wainwright. “A vivid snapshot of coming-of-age in the 1950s, the book recounts the sisters’ school days and rebellious teenage antics, and their beginnings as musicians. It takes us through the vibrant folk music circuit of the 1960s in Montreal and New York City, and the burgeoning social movements of San Francisco, and ultimately leads to the formation of the folk music duo Kate and Anna McGarrigle, revealing the genesis behind some of their beloved songs and following their early days recording and performing…Charming and witty, interspersed with lyrics and photos, this book captures the McGarrigles’ lives, idiosyncratic upbringing, and literary and musical influences.” 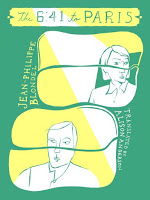 The 6:41 to Paris by Jean-Philippe Blondel: If The Girl on the Train wasn’t enough to satisfy your train-based-thriller reading for one year, you’ll also want to pick up this novel, already a bestseller in France. “Cécile, a stylish forty-seven-year-old, has spent the weekend visiting her parents in a provincial town southeast of Paris. By early Monday morning, she’s exhausted. These trips back home are always stressful and she settles into a train compartment with an empty seat beside her. But it’s soon occupied by a man she instantly recognizes: Philippe Leduc, with whom she had a passionate affair that ended in her brutal humiliation thirty years ago. In the fraught hour and a half that ensues, their express train hurtles towards the French capital. Cécile and Philippe undertake their own face to face journey—In silence? What could they possibly say to one another?—with the reader gaining entrée to the most private of thoughts. This is a psychological thriller about past romance, with all its pain and promise.”

Gratitude by Oliver Sacks: Neurologist and author Sacks died in August after a recurrence of cancer. This book compiles four essays Sacks wrote in the last two years of his life, examining mortality, illness and awe in the wonder of life and which “form an ode to the uniqueness of each human being and to gratitude for the gift of life.” The book follows close on the heels of Sacks’ memoir On the Move, which was published only a month before his death.

Books to Watch for in November
https://haligonia.ca/books-to-watch-for-in-november-113307/