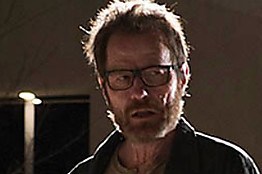 That’s what I tweeted minutes after the Breaking Bad series finale finished. It was a little Twitter quip, but seriously – I can’t believe this show is over.

What an epic final season. I won’t spoil anything for readers who haven’t watched, so if you’ve seen the Breaking Bad series in its entirety, click through for more.

Writing about this episode is hard. What can I say? I thought it was fantastic. A perfect ending, if there is such a thing. It was suspenseful, a slow build, and it felt true to the characters.

Is Breaking Bad the best TV series of all time? It’s so hard to say. I don’t think it was perfect, I think there were questionable moments earlier in the series. But they gave us one hell of an ending. It was a satisfying conclusion, not in a “I feel great” kind of way (because, of course) but in a “well that show did EXACTLY what it wanted to” kind of way. Breaking Bad stayed on course, it got from Point A to Point B in a way that made you feel like they always knew what Point B would be. Breaking Bad is one of the shows I will bring up when arguing that TV is art.

Walt engineered his exit with the same mix of genius, arrogance and luck that got him there in the first place. For a very long time, I was absolutely not rooting for Walt. I was rooting for Hank, for the goodness of the universe, whatever. I wanted Walt to face his just desserts, and then I realized there was no such thing. No punishment could equal the pain he caused.

Instead, we got something close. Walt finally admitted to himself, and to Skyler, that he was never in this for his family. It was always all about him. Part of me wanted to see Walt outsmarted. Humiliated. Part of me still wishes he had been. But in a way, getting caught by Hank did that to him. He got got, and then the goons he was working with got Hank.

This episode was all about Walt cleaning up his own mess before dying. I knew Walt would die after that shot early on in the episode, when the camera zoomed in on the New Hampshire license plate. “Live free or die”. He wasn’t free, whether he went to jail or not.

At first, I had no idea what Walt was going to do in Gretchen and Elliott’s house. The show really threw me for a loop there. I didn’t think he’d kill them, that felt too petty. He needed to prove something to them, his own success or brilliance. In fact, he wanted to use them. He gave them all his money (was it around $9million?), and instructions on how to get it to Flynn when he turns 18 in less than a year. And then, because he knew they’d never make good on the deal, he threatened them.

You have to hand it to him, the threat was brilliant. I mean, actually hiring hit men to make sure Gretchen and Elliott kept their promise would have been smart. But saving that money and using Badger, Skinny Pete and a couple of laser pointers was even smarter. So Flynn will come into a large sum of money in the form of a charitable donation, never knowing it’s filthy, bloodier drug money. Make of that what you will.

Walt broke into Skyler’s house and gave her the location of Hank’s body. For Marie, giving Hank a proper burial was the least he could do. But he also gave Skyler something to trade for immunity. He protected her, but I don’t think he did it out of love or care. I think he did it because he simply didn’t want the woman he manipulated and broke to pay for his actions, actions that Walt will always see as accomplishments more than crimes.

Walt crashed a meeting with Lydia and Todd, and tried to offer some cockamamie plan to cook meth without Methylamine. Of course it was fake – Walt only wanted access to Jesse. Blue meth on the market meant Jesse was still in commission.

As soon as Lydia poured the lone packet of Stevia at the table into her tea, I knew she was toast. Gah! Brilliant again. Damnit, this show was making me root for Walt again. I wanted him dead, but I also wanted him to succeed.

*As an aside: It was awfully cocky of Walt to tell Lydia he’d used Ricin to poison her. Won’t she go straight to the hospital? I looked it up, and while it is very hard to diagnose, Ricin poisoning isn’t necessarily fatal.

Taking out the Nazis would be harder, since there’s a bunch of them and they’re armed with more than a nervous disposition and a tendency to follow habits. Walt rigged up a motorized machine gun that would emerge from his car trunk and spray bullets at the push of a button. The scenes with Walt and the Nazis were very tense, and Walt managed to get Jesse into the room before letting bullets fly. He threw himself on top of Jesse, protecting him. Todd, the disgusting cockroach he is, survived. Jesse strangled him with his chains, revenge for Andrea.

I could argue here that Walt was too easily left off the hook. He took care of Skyler and Jesse before dying. But the fact that he did so doesn’t make Walt much less evil to me than if he hadn’t. He just gained some self-awareness, he knew he ruined their lives.

Walt wanted Jesse to kill him, and I’m glad Jesse didn’t. It would have been too easy. Why should Jesse have more blood on his hands? If Walt wanted to be dead, he should have to do it himself. Again, you might be able to say Walt was let off easy – he already had a bullet wound, and didn’t have to pull the trigger himself. He wandered the meth lab, his kingdom, and fell to the ground just as the cops arrived.

It’s midnight, so I’m going to bed. Overall, I think the series finale was fantastic and I wanted to write about it right away. But I might come back and add more tomorrow. Please share your thoughts in the comments!