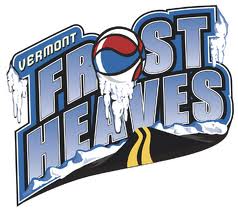 In a press release from the St John Millrats announcing a scheduling change, it was revealed that the Vermont Frost Heaves have folded.

(January 27, 2011 Saint John, NB):  The Saint John Mill Rats announced that the game scheduled against the Vermont Frost Heaves on February 4th will be played on February 11th at 7:00pm AST against the Halifax Rainmen.

The schedule change was required due to the Vermont Frost Heaves ceasing operations.

"We are saddened by the closure of the Vermont Frost Heaves organization. They had been a solid rival of ours over the past four+ years. We were all aware of the fragile situation that their team was in financially, but as a league we decided to give them a chance due to their history and proximity as a travel partner" stated Mill Rats President and General Manager Ian McCarthy.

McCarthy further adds "We are confident that the remaining seven teams are stable and that the remainder of the PBL season will continue as planned."

As part of the reshuffling, Saint John will not be playing a road game on February 13th.  They are awaiting an additional road game and date from the PBL to make up for that game.

Vermont's players were made available in a PBL Dispersal Draft at 10am AST today.  The draft resulted in 6'9 poward forward Ross Demasi being selected by the Saint John Mill Rats.  Demasi, a PBL All Star last season, averaged 10 points, 8 rebounds, and 1 block per game this season through six games with Vermont.