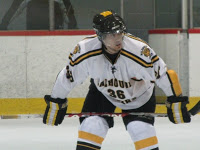 Tiger’s fans have been waiting all season for Benjamin Breault to break out this season with a brilliant offensive performance.
On Friday night at the Memorial Arena vs. the UPEI Panthers, they were rewarded for their patience.
Breault fired two goals and added an assist in leading his Dalhousie Tigers to a 6-5 overtime victory over the Panthers. It was the Tigers fifth overtime victory this season in six games that have gone to the extra session.
Daniel Bartek tipped in a blast from the point by Brett Plouffe to give the Tigers their seventh win of the season, putting the team over the .500 mark for the first time this year. Dalhousie has now won three straight games after a dismal mid week performance vs. Saint Francis Xavier last Wednesday.
Second year goaltender Bobby Nadeau made forty saves for Dalhousie. Brad McConnell notched his eighth goal of the season in the first period while Benoit Gervais and Francois Gauthier rounded out the Tigers scoring.
The Tigers squandered leads of 4-2 and 5-4 on route to victory over the gritty Panthers who entered the contest ranked fifth in the country.
The Tigers won’t have much time to celebrate; Tomorrow night the mighty UNB Varsity Reds come to the town. The Reds are the first place team in the conference and ranked third nationally. UNB lost to Acadia on Friday night 3-2 in Wolfville.
Game time from the DMA is 7:30. The game will be webcast on ssncanada.ca. Joel MacDougall and Bill McLean will have the call.
Email comments or questions to sports@haligonia.ca. Follow us on twitter @haligoniasports.

Breault Breaks Out Versus Panthers
https://haligonia.ca/breault-breaks-out-versus-panthers-29667/