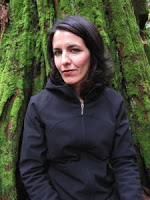 Charlotte Gill has been awarded the 2012 British Columbia National Award for Canadian Non-Fiction for her book Eating Dirt: deep forests, big timber, and life with the tree-planting tribe (M).
The awards are described as such:”The British Columbia National Award for Canadian Non-Fiction was launched in 2005 to honour Canada’s finest writers of non-fiction and to celebrate a genre that stimulates our national conversation and shares knowledge about the complex world in which we live.

The jury described the book as “”…an insider’s perspective on the gruelling, remote and largely ignored world of that uniquely modern-day ‘tribe’, the tree planter”. Gill’s description of the forest “brings it vividly to life in all its mystic grandeur with striking details and evocative analogies, using intelligence, verve and humour to illuminate the dangers that live within, and threaten from without”.
Also shortlisted for the award were:
The Chimps of Fauna Sanctuary: a Canadian story of resilience and recovery (M)
by Andrew Westoll
Human Happiness: a memoir (M)
by Brian Fawcett
Bad Animals: a father’s accidental education in autism (M)
by Joel Yanofsky