It was 8:20 p.m. when we pulled into campsite #189. We were in Broad Cove and it was the first night of our three day tour of Cape Breton. 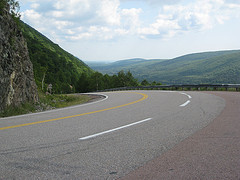 Minutes earlier we entered the Cape Breton Highlands Park and paid our family rate (2 adults, 2 kids) of $19.60 / day at the ticket gate. After driving about five minutes, we arrived at the gate for Broad Cove campground where we were pleased that they had one campsite left but (to our kids disappointment) there was no fire pit.

The light was beginning to fade so we quickly set up camp and ate dinner. After quick showers, we crawled into our sleeping bags. No reason to stay up because there was no fire to watch- the kids made sure that we took note of this.

Somewhere between the woodpeckers and the crows my REM sleep was interrupted. I generally don’t mind crows but a nylon tent does not make a great sound buffer. 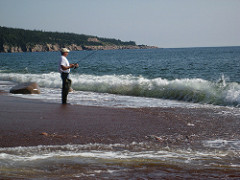 Before packing up to leave we walked down the beach where the kids played in a brook that flowed into a beach. The beach had a couple broken up lobster traps that were left over from a storm. Nearby a man wearing waders fished for mackerel and trout from the beach.

My husband headed back to the campsite while the kids and I explored the brook and beach. When we returned, everything was packed up and we were ready to go. This was awesome and the kids and I planned this perfectly 😉 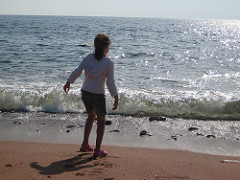 Next stop? Many. It was the Cabot Trail and who knew what what around the corner.

See photos from our Cape Breton trip on Flickr

Information on Broad Cove and other campsites in the park