It’s been fairly quiet here over at Life of Burgers, due largely in part to an extremely busy work schedule. Working 70 hour weeks for the last 9 months was great for the bank account, but it didn’t really allow much time to get my hands on some tasty burgs.

Luckily, the film season is slowing down now for the year in Nova Scotia, which means I’m ready to make up for some lost time and get down to some burger business!

To get me back on track, I swung by Relish and ordered up Le Nordique, and a Centurion poutine to accompany it! 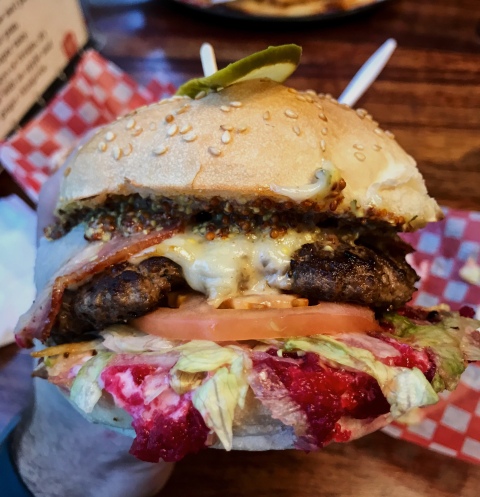 Served up on a cast iron pan, and nestled up close to the Centurion poutine I chose as a side (more on that later), Le Nordique doesn’t like to brag about what is going on between the buns and keeps it very modest when it comes to appearance. It is a bit on the messy side, but I’d rather have sauces dripping out everywhere than little to no sauce at all.

As someone who studies each and every burger placed in front of him, not being able to see all the components can be somewhat frustrating, but it just makes the first bite that much more surprising! 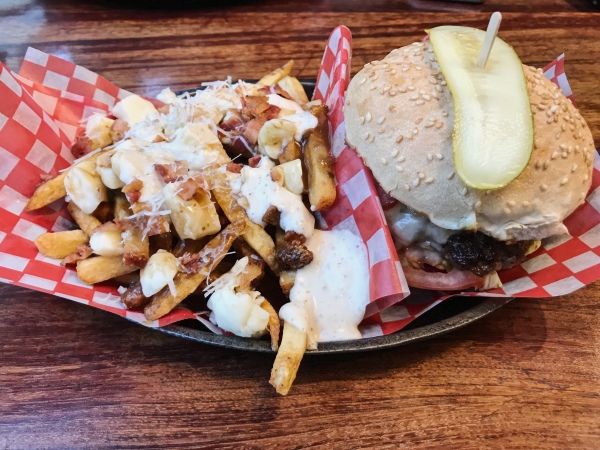 Something I always appreciate about the burgers at Relish is how the components of each unique burger always work well together. Where Le Nordique wins me over is with the use of various savoury layers that create an overall flavour that is all kinds of delicious.

Draped over the beef patty was a generous amount of Swiss cheese and two thick slices of back bacon, which welcomely bumped up the meatiness level a few notches. The tangy dijon gave a nice little kick, which paired well with the roasted garlic mayo and gave a great flavour profile to the burger. My only real complaint about this burger was the bun, which was slightly too dry for me, but luckily they did not skimp on the sauces when putting this one together.

I also have to give it up to that beet relish that they love to use on their burgers here. Not only does it taste great, it gives a great colour pop in the overall appearance of each burger.

If you’re looking to further enhance your meal, I highly recommend going with the Centurion poutine for your side. It’s a classic poutine with parmesan cheese, bacon, and caesar dressing. Slightly excessive but it is a damn good time!

To get Le Nordique in a combo, it will cost you $12.36. That’s a great price for a filling meal, but I highly recommend upgrading your combo to the poutine, which will obviously cost you a few more dollars but after you try it, you will forget all about that!

After going for as long as I did without getting my hands on a quality burger, you probably could have put any old one in front of me and I would have devoured it. Thankfully, the one I picked to break the burger fast was one that I thoroughly enjoyed. They have a solid list of burgers over at Relish, and Le Nordique is no exception. If you haven’t already tried it, I would definitely recommend stopping by and giving it a go!