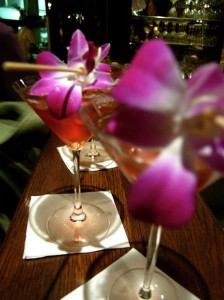 What do Richard Simmons, the Guinness World Records, and Young MC have to do with each other?

On Monday night, Halifax Chicks were invited to a special tweetup at ONYX Dining Room & Cocktail Bar. It was a slight departure from our regular monthly events. Ben Boudreau from the local branding agency Revolve was brave enough to break our cardinal rule for Halifax Dudes by showing up without high heels. We forgave him this transgression because of the wonderful woman he had brought with him as a guest speaker (plus it didn’t hurt that he bought us all a round of fancy drinks and snacks).

Enter Bust A Move. A unique fund raising event that will donate 100% of the proceeds to charity. All the while they’ll be attempting to break two Guinness world records while having a heck of a lot of fun with none other than Richard Simmons leading one of the sessions!

Ambitious? Maybe. But you know what the best part is? It’s changing the current model of fund raising where sometimes as little as 50% of the proceeds go to the charity. And it’s a home grown idea. That’s right: born right here in Nova Scotia.

Why is it so important?

Every year in Nova Scotia, 700 women are diagnosed with breast cancer. Every second day, one of these women dies.

All proceeds raised by Bust A Move teams will go toward the purchase of a much needed digital machine for mammograms, thus increasing output by up to 75%. This one piece of equipment will allow the QEII and IWK Foundations to raise the standards across all levels of breast health.

The event takes place on January 30, 2010. Up to 1,000 participants will converge on the Metro Centre in teams to literally bust a move for six hours. Check out the Bust A Move blog, follow them on Twitter, join the Facebook group, put this badge on your blog:

If you can afford to donate, please consider supporting the Halifax Chicks team. Or, even better, register your own team. Whether you can physically participate in the event or not, let’s band together as a community to help get the word out, meet the goals and turn heads in the rest of Canada.

In the meantime, I’ll leave you with this Bust A Move flash mob that appeared at the Halifax Shopping Centre earlier this week: