One of the last places you ever want to be with your kids. If you’re there it means something bad is in the process of happening, something has already happened or you are questioning something because you just don’t have a good feeling about it. No matter which way you slice it, as a parent it’s yucky. 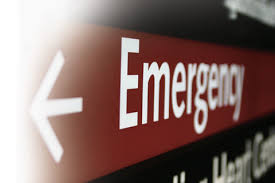 I remember worrying about how I’d handle our kids hurting themselves or being sick when I was pregnant with our first. How stressed would I be? Would I be able to keep my wits about me? About three weeks after she was born we were at the lake (about an hour out of the city) and I woke in the middle of the night to nurse and realized her breathing sounded funny. It was noisy and it seemed to me like she wasn’t getting enough air. My husband and I sat there for awhile listening to her and then decided to drive in to the IWK in the middle of the night to get her looked at. Diagnosis? A booger. Seriously. What did we know? She was three weeks old. We were first time parents. The doctor basically showed us how to use saline and a bulb syringe and sent us on our way.

My scariest moments in emergency have both been with our son, our youngest. The first was when he had his first reaction to peanuts. We were lucky in that it wasn’t a breathing reaction – he had really bad hayfever symptoms (red watery itchy eyes) and a rash all over face. Instinctively though, I knew something was wrong and I was worried. Another time his breathing seemed really off to me at home – I could hear the wheezes. We had just had a wonderful day as a family, he was energetic and happy but I kept hearing rattles and told my husband I was taking him in. When I got there the triage nurse sent us right in based on how terrible his breathing was. We spent hours there as they gave him puffers and worked to get him back to normal.

Last weekend we had a trip to emergency following a minor incident at the lake with our oldest. She was pushing off a ladder to glide into the water, slipped and cut her ankle (right around her Achilles). The bleeding seemed to get under control quickly but then kept starting again every time she moved or flexed her foot. We took her in to the hospital in Middle Musquodoboit to see if she might need stitches. I have to commend everyone there for the incredible care we received. The nurse who cleaned her wound talked directly to her and explained everything she was doing (our daughter was obviously nervous about what was going on). Once the nurse got a good look at the cut she said it was likely that the doctor was going to want to do something with it. She looked at our daughter directly and told her that the doctor would explain her options to her and she could make her own decision.

When the nurse left, my husband and I followed her lead and told our daughter that she should listen to what the doctor has to say and make the best decision for her and for the rest of her summer based on what she hears. Sure enough, the doctor explained to her that the two options were stitches and tape and what each would mean. In the end, our almost-seven-year-old made her own decision and chose stitches. From there, my husband showed her all the places he’d ever had stitches and explained how cool it was that she was getting her first stitches in the same hospital he did. We talked her through the freezing and the procedure and in the end, she came out like a champ.

As we drove away, my husband and I high-fived. In the grand scheme of reasons people visit an emergency room it was minor. Nevertheless, we both left feeling like we’d parented well as a team in the moment. We supported her, let her make decisions, kept the mood light and hugged her when she needed it. First Miller family stitch experience…check.