If any of you were at the Remembrance Day ceremony at Sullivan’s Pond you may have noticed a frantic looking woman searching all around for her son. One minute he was standing next to her and the next minute he wasn’t.

That frantic looking woman was me and those few minutes (until we found him running back after hiding behind a garbage can) felt like hours.

More than once lately I’m experiencing these moments of parental panic at the hands of our son. It’s a bit of a new thing for me actually. I have one memory of losing one of the girls in Home Depot and freaking out but other than that, the unexpected moments of panic have been few and far between with the girls.

It’s different this time around. Our son, who is almost four, has a bit of a mischievous daredevil inside him. It’s hard to accurately describe him because in general he’s a pretty well-behaved kid. Over the past few weeks or so he’s just become more of a risk taker. Last night was a perfect example. We were leaving my Dad’s condo after celebrating his birthday and the five of us were walking down a path towards the parking lot. In a split second, our son suddenly decided that the best path for him was through the insanely steep garden down to the parking lot and off he went. 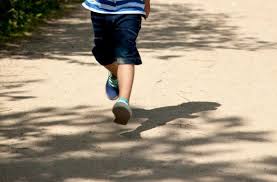 A similar – but scarier – incident happened last week when we were leaving our oldest’s guitar lesson at night. We were all walking down a nice wide sidewalk toward the car when he suddenly decided to dart out between two parked cars. He went right around one of the cars, hugging it tightly, and back onto the sidewalk. I’m sure the entire neighborhood heard me scream his name. I knelt down, looked into his eyes and explained how dangerous what he did was. I think he could tell how much he scared me because he listened and apologized but he also made sure that I knew he would never run into the road. He explained that he just ran around the car. Clearly, the talk went on a little longer.

So I suddenly find myself having to be strategic when I take him out in public. For every nine times that he’s absolutely fine, there seems to be that one time where he surprises us. I started looking up some ideas to help keep this under control and thought I’d share a few of the things that I’ve learned and am working on with him right now:

Child Safety Link has some great pamphlets on how to keep kids safe at different ages. As I was going through the one for 3-5 year olds, there was a quote that really jumped out at me.

“Your preschooler may be able to repeat or recite a safety rule. This does not mean that she understands it or will be able to follow it.” A very healthy reminder for us all.