My Director at work recently asked us all what we were most looking forward to over the holidays. The answer was the same for all of us – time.

Time with our families, time without as many scheduled activities, time in the morning, no time commuting and time to just ‘be’. It’s amazing how big the word ‘time’ has become in our collective lives.

As I sit and think about the Big Man’s impending arrival, my mind is on a different kind of time. I find myself thinking a lot about the limited amount of time we have left while all three kids fully believe in the magic of Christmas. Our oldest daughter, who is eight, is a pretty inquisitive and savvy kid. She’s been asking a lot of questions this year and I can literally see the wheels in her brain spinning as I very carefully choose the words I use to answer.

The interesting thing is that the questions are not about Jolly Old Saint Nicholas. The questions are about our Elf on the Shelf. I realize that I’m going to be struck down for saying this publicly but in hindsight, I think bringing that elf into our house two years ago was probably one of the worst decisions I’ve ever made. If I could do it all over again, I would have just left the kids a note from an elf at the beginning of December when everyone else’s elves are showing up. That note would have explained that he knows the kids have had a great year and that more elves were needed to make toys in the North Pole. It would have finished by saying that he hopes they understand and that he’s very excited for them to see what he has for them Christmas morning. In fact, this may be exactly how I get out of it next year. 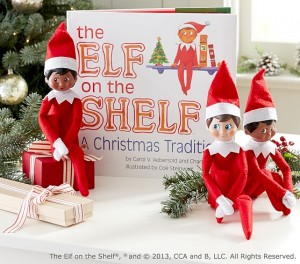 To be clear, I think the concept is insanely fun. I don’t have any problem moving it around and I love watching the kids get excited to find him every morning. My problem with it, now that our eight-year-old is analyzing the concept, is that the overall idea of it is pretty far-fetched. Not to say the Big Man isn’t – but this one is in their faces every single day.

And the worst part, in my opinion, is the marketing of it (I can say that because I’m a Marketer). If I owned company, I’d be glowing in my marketing success. I’m sure the numbers and sales associated with its launch have been astronomical. From a parent’s perspective though – how necessary are the massive displays in the book stores as soon as you walk into the children’s sections? And, do the boxes need to be able to be opened so that you can see the elves inside? I found our girl at the display last week with a few of the boxes open – analyzing what the elves looked like compared to ours and wondering why there were clothes for them.

I don’t consider myself a Scrooge. I love everything about the holidays and think that the magic of Christmas and Santa is such a gift. Our kids know that the mall Santas are helpers and not the real Santa (after all, he’s way too busy to sit in malls all day). What I have realized though is that once kids can read and think analytically for themselves, the elf is a pretty easy one to figure out. There is proof everywhere and once the questioning starts, it doesn’t stop.

Not all kids are made equal. Our daughter happens to be an analyzer and at the same time, she’s a child who wants to believe. The problem is that the proof is adding up in her little brain and she’s having a hard time rationalizing the two. We’re trying not to give the concrete truth and at the same time trying not to lie in our answers to her. We know that the second the elf magic is gone, she’ll move onto the rest of the Christmas magic. She’s eight. It’s going to happen sooner or later. I just believe that in our house, the elf might be the slippery slope that changes it a year or two earlier than it needs to.

Sorry Jolly,  it’s back to the toy shop for you next year.