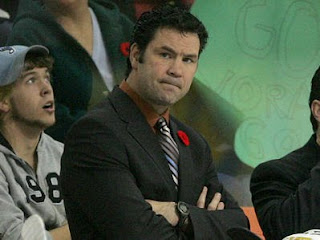 This week the Halifax Mooseheads announced they had re-signed GM and Coach Cam Russell to a contract extension, keeping the former NHL player around until the end of next season and although this isn’t a big surprise, it will be upsetting to Moosehead fans in the manner it was announced.

Apparently Cam was re-signed last month but the team chose not to announce it, similar to the resigning of Marcel Patenaude in the 2007/2008 season, where they announced him signing a new contact a mere eight months later.

It’s obvious that Bobby Smith and the management team decided to hold off on the press release due to disgruntled fans who are upset with the job that Cam has been doing behind the bench.

I’ll fully disclose that I’m a full-fledged, card-carrying “Cam Russell Must Go” fan club member, albeit as a GM he has been doing an okay job, as a coach he has failed to make an impact on the team and get positive results.

Here are his fantastic stats for the last four seasons as a Coach:

This gives him a total of 106-143-9-18 for a shiny winning percentage of just .384% and yet ownership is more than happy to keep him behind the bench.

Last season the Mooseheads went up and down, and then down some more. Able to pull off some surprise wins over the top teams, but failed to show up in must win games against fellow cellar dwellers.

With the junior draft fast approaching and the Moose sitting with the overall 2nd pick and six others in the top 35, Cam is under the microscope to put together a team that can compete for the Memorial Cup in the next two years.

For now I will put away the “Will trade Cam for Bag of Pucks” sign, and wait and see how next season pans out.

After two seasons in last place, Cam will need to pick it up or the fans will finally give up on him and chase him out-of-town.

Henry Whitfield is an avid sports fan who covers everything and anything in the sports world, while focusing on hockey and football. Follow him on twitter