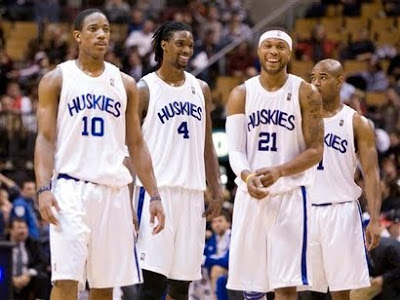 Record: 11W-15L (Last week: 2W-2L)
Not a bad week for the Raps, pulling out two wins last week as they hover just below that .500 mark.  First up, they put away the 3-17 Timberwolves in Toronto, in their first throwback jersey night of the season.  The Raps sported the Toronto Huskies jerseys which paid hommage to one of the first professional basketball teams in Toronto dating back to the 1940’s. The Raptors followed that win with a loss to rookie of the year candidate, Brandon Jennings, and his Milwaukee Bucks the next night.

The Raptors then had a rematch against the Atlanta Hawks on Friday night.  It was an opportunity to redeem themselves against the Hawks after their embarrassing loss from the week before, but they were no match to the young and athletic Hawks squad, losing 111-89.  On Sunday, the Raptors put together one of their best efforts all season defeating the Houston Rockets 101-88.  Hedo Turkoglu had his best game as a Raptor putting up 23 pts on 9-18 shooting along with 2 threes, 6 boards and 5 dimes.

Steve Nash, Phoenix Suns (Victoria, BC)
18 PPG, 11.1 APG, 2.8 RPG
(Last week: 25 PPG, 11.0 APG, 3.7 RPG)
The Suns have lost two of their last three last week including a loss against the Denver Nuggets where there was a questionable non-call on Steve Nash from the officials.  It was a tough week for Nash’s Suns as they faced off against three of the toughest teams in the league: Denver, Dallas and Orlando.  Nash remains the league leader in assists and had an 18-assist game against the Magic.

Joel Anthony, Miami Heat (Montreal, QC)
2.6 PPG, 2.7 RPG, 1.3 BLKS
(Last week: 5.0 PPG, 3.0 RPG, 3.0 BLK)
Joel Anthony and the Heat had a light week last week, playing only two games against the Mavs and Grizzlies.  Joel got the start in place of Jermaine O’Neal in the Heat-Mavs matchup.  Anthony played 31 minutes, and had 6 pts, 4 boards and 4 blocks.  Eric Dampier got the best of Anthony though, as Dampier had 20 pts-17 rebounds in the Mavs win.

Jamaal Magloire, Miami Heat (Toronto, ON)
2.8 PPG, 2.5 RPG
(Last week: 0.0 PPG, 1.0 RPG, 1.0 STL)
Jamaal didn’t get much clock last week, playing only 5 minutes against the Grizzlies.  He continues to make the news though, as he and Matt Bonner continue to be rumoured as possible additions to the Canadian senior men’s team for next year’s World Championships.

CANADIAN CONTENT: How the Canadian flavour of the NBA performed last week
https://haligonia.ca/canadian-content-how-the-canadian-flavour-of-the-nba-performed-last-week-9780/