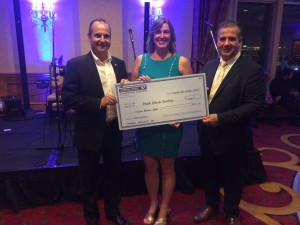 The annual Canadian Ferry Association (CFA) Conference & Trade Show, held this year in Halifax from September 24-26, travels to a different part of the country every year – and that gives the opportunity for delegates from across the country to give back to the host community.
“We believe that the CFA Conference & Trade Show is the best event for the marine sector in Canada, bar none. It has become a tradition at the conference to showcase some of the important charitable work happening in the communities we visit and give our delegates the chance to make a real difference in people’s lives while having a little fun along the way,” said Captain Jamie Marshall, Chair of CFA’s Board of Directors.
For 2017, CFA chose Feed Nova Scotia, the province’s main food distributor, as the recipient organization. Last year, food bank use in Nova Scotia had climbed faster than in any other Canadian province.
“Through the generosity of our delegates and a matching donation from CFA, we were so pleased to present a cheque to Feed Nova Scotia for $11,000.00. What an effort for such an important cause,” said Captain Marshall.
“A gift this size will allow us to distribute enough food for 17,000 meals–that’s huge! And the real impact goes even deeper, because food is so much more than physical nourishment. It’s comfort, it’s peace of mind, and often it’s a stepping stone to amazing things,” said Karen Theriault, Director of Development and Communications, who spoke to the crowd about the work of Feed Nova Scotia. “The generosity of everyone in the room that night was truly overwhelming. It’s a gift we won’t soon forget.”
PHOTO CAPTION:
The annual Canadian Ferry Association (CFA) & Trade Show was in Halifax from Sept 24-26. During the event, delegates raised funds for Feed Nova Scotia and presented a cheque for $11,000.00 at the closing festivities.
L-R: Captain Jamie Marshall, Chair of the CFA Board of Directors; Karen Theriault, Director of Development and Communications for Feed Nova Scotia; Serge Buy, CEO of CFA.