Earlier this week, we posted about some of the big names in Can Lit who are releasing books this fall, today we’re moving to some of the up-and-comers. Some of these authors have accolades to their names already, or have regional loyalties, but I don’t think any are considered big name Canadian authors. Hopefully that’s about to change.

All quotes from publishers unless noted otherwise.

Once You Break a Knuckle
by D.W. Wilson (September 1):

BC born, UK based author gives us a debut collection of “stories of good people doing bad things”. Wilson’s writing has already garnered attention: in 2009 he won a scholarship to the University of East Anglia that is co-sponsored by the Man Booker Prize. 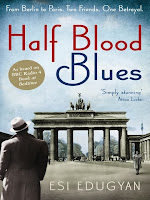 The Victoria, BC author’s second book has been included on the long list for the Man Booker Prize, but many Canadians still don’t know her name. “Paris, 1940. A brilliant jazz musician, Hiero, is arrested by the Nazis and never heard from again. He is twenty years old. He is a German citizen. And he is black.”

A poet and author of fiction and nonfiction, Senior is another up-and-coming author that has already achieved critical, but not necessarily commercial, acclaim. Dancing Lessons begins when “Gertrude Samphire is sent to by her estranged daughter Celia to Ellesmere Lodge, an assisted living centre. Gertrude is unimpressed with her new wealthy neighbours, and spends most of her time alone. It is only through writing that she finds her voice, and she begins to record her life in a notebook”

Quill and Quire magazine describes Newfoundland author Hallett as “[crafting] genre-busting stories and novels that frequently experiment with gender and perspective”. Her latest shifts between the 18th century and present day, as two female protagonists dare to question the status quo.

The Toronto poet delivers a first novel that sounds like a heart breaker: unable to accept the drowning death of his brother, 12 year old Ferd pens notes asking him to return, leaving them “in any pool of water he can find.”

Autobiography of Childhood by Sina Queyras (October 15): Another first novel from a previously published poet. The story of a family facing, and remembering, death: “The Combals are not unacquainted with death: they have never quite recovered from the loss of one of them in childhood. And now, on Valentine’s Day, they are losing another.   ”