True Crime is a genre that has been popular throughout the years that I have worked in libraries – and I am sure it always will be. Since the start of the New Year, there have been a lot of reports in the newspapers on crime and the problem it presents to society. Crime is not a new thing. Anyone familiar with the Bible will point out the tale of Cain and Abel. Unfortunately our own communities are not immune to the presence of crime and here are some books that show this:

On the Farm: Robert William Pickton and the tragic story of Vancouver’s missing women (M)
by Stevie Cameron
The Pickton case was the largest of any serial killer case in Canada. Robert Pickton was convicted of the second degree murders of six women. He was also charged in the death of an additional 20 women. In 2007 he confessed to committing 49 murders to a undercover police officer. He stated that he wanted to kill 50 but he got sloppy and got caught. Pickton trolled the streets of Vancouver for his victims, often street workers or drug users. He would then take them to his pig farm where he would murder them. Award winning author Stevie Cameron presents personal histories of both the victims and the killer. 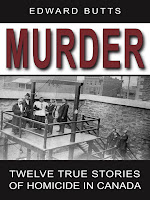 Murder : twelve true stories of homicide in Canada (M)
by Edward Butts
Edward Butts covers Canadian cases from the colonial times to the 20th century, from East to West and up to the Arctic. These twelve stories are a fascinating look at crime in Canada. The case that I found most interesting was the local one. How did an American con man end up in Cape Breton, only to be charged with murder? Read this book to find out.
A New Kind of Monster : the secret life and chilling crimes of Colonial Russell Williams (M)
by Timothy Appleby. 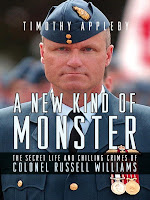 Camouflaged Killer (M)
by David Gibb
Col. Russell Williams was a well respected man. He was regarded as a model military man over his 23 year career in the Canadian Forces, including being the base commander at CFB Trenton. This all changed with his arrest in February 2010. Williams plead guilty to all 88 charges against him, which included 2 accounts each of first degree murder, sexual assault and forcible confinement, and 82 break-ins and attempted break ins. On October 22, 2010 Williams was stripped of his commission, rank and awards by the Governor General of Canada, and in a rare move, his uniform and metals were burned.
If you would like to read something about local crime:

Somebody’s Daughter: inside the Halifax/Toronto pimping ring (M)
by Phonse Jessome
Even though this book was published over 15 years ago, it is still one of the most popular true crime books requested at our library. It takes the reader inside the lives of the pimps of Canada’s prostitution rings, specifically the Halifax-Toronto pimping ring.
Murder at McDonald’s: the killers next door (M)
by Phonse Jessome
Jessome continues to account the stories of local crime. In this 1994 book, he investigates the case of an infamous robbery gone wrong at a McDonald’s restaurant in Cape Breton

Life with Billy (M)
by Brian Vallee
Another very popular book at the library. We frequently get requests for this and the related DVD documentary. It has been over 25 years since the groundbreaking “not guilty” verdict was delivered in Jane Hurchman’s first degree murder trial in Liverpool. Vallee’s book details the hell-on-earth life of Jane’s life with Billy Stafford, a violent psychopath and sexual sadist, and its aftermath.
On South Mountain: the dark secrets of the Goler clan (M)
by David Cruise

Cruise writes of one the most shocking cases of abuse that I have ever read. On South Mountain in the Annapolis Valley there lived the Golar family, a clan of mostly uneducated and inter generational families living in poverty. In 1984, sixteen men and women of this family were charged with hundreds of cases of incest and sexual abuse of children as young as five. The family was brought up feeling this behavior was “normal”. It is hard to believe that this behavior still exists in a civilized country.
Crime will always exist, but maybe by reading these books we can learn to prevent it from happening to you or those around you.