Recently, I have become attuned to the chorus of transplanted Capers declaring that pizza is much better in Cape Breton than it is in Halifax. There are a couple problems with this sentiment.

First, it requires Halifax to have a homogeneous pizza style. Second, it requires Cape Breton to have a homogeneous pizza style. The last time I found myself immersed in such a story, I was living in Calgary (which sort of does have a style), and my Windsor friends were singing praise of the pizza in Windsor, Ontario (which also has a style). Now, I know for a fact that Halifax is not pizza-consistent. You simply cannot reduce Halifax pizza to that awful slice you had at pizza corner. 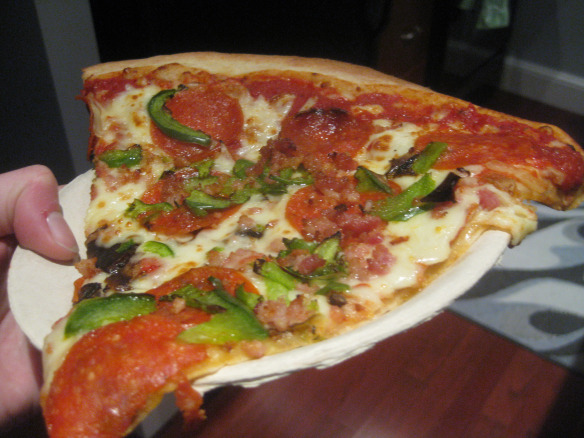 A slice of Pizza Corner in Halifax.

But the statement: “Pizza in Cape Breton is better than pizza in Halifax” begged me to examine the quality and homogeneity of Cape Breton pizza. For my purposes, I assumed that by “Halifax pizza” we are talking about the hand-tossed, sweet sauced pizzas popular among starving students and drunk people (think Xtreme Pizza and Alexandra’s). I hypothesized that Cape Breton has a unique pizza culture, with its own regional style of pizza. With this prospect of discovery on my mind, I went on a quest for pizza in Cape Breton. 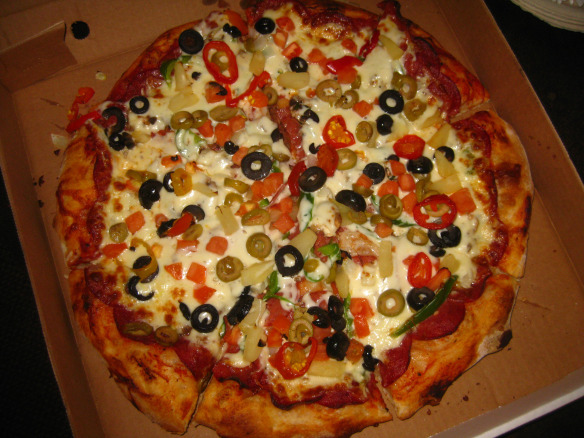 The Tom’s Special at Tom’s Pizza in Baddeck

The first pie of this journey was from Tom’s Pizza in Baddeck. The “Tom’s Special” has a lot going on with pepperoni, onion, mushroom, tomatoes, green pepper, pineapple, hot peppers, and black and green olives. We ordered this pizza at the counter, which stood in front of the open kitchen. We couldn’t help but notice that everyone in the kitchen was female. My Mother somehow deduced from this that our pizza would be made properly, because “women don’t fart around”. The kitchen looked clean, and each woman seemed to be assigned a distinct role, whether tossing the dough, dressing the pizza or slicing the finished product. I’ve never seen such a sight, but it was pretty awesome.

We all felt that the toppings were fresh and of good quality. The crust was enjoyably edible. The pizza was not too greasy, but there was arguably too much cheese (if you are predisposed to making such an argument). 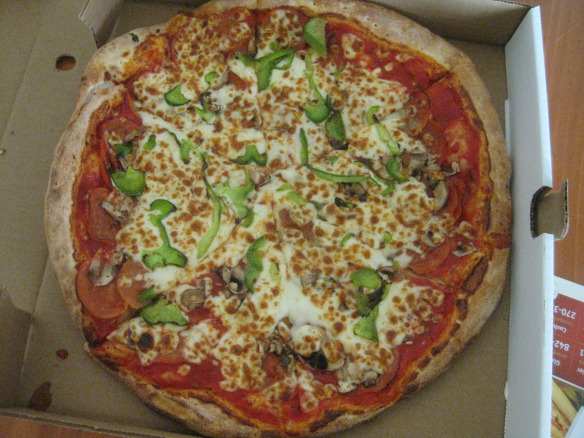 One unique thing about Cape Breton is “Combination Pizza”. If you order a combination pizza in Cape Breton, it will always mean pepperoni, mushrooms and green pepper. On the mainland, I have seen this combination referred to as a “Maritime Classic” (as distinct from “Canadian Classic” – pepperoni, bacon, mushroom), but it is also the magical combination found on Montreal-Style pizzas. It is only the nomenclature that makes each region unique in this respect.

Anyway, my research led me to believe that Kenny’s was the Sydney favourite, overtaking the more famous Napoli Pizza in overall quality. So we got a pizza from each place, which was easy enough as they are literally neighbours in downtown Sydney. 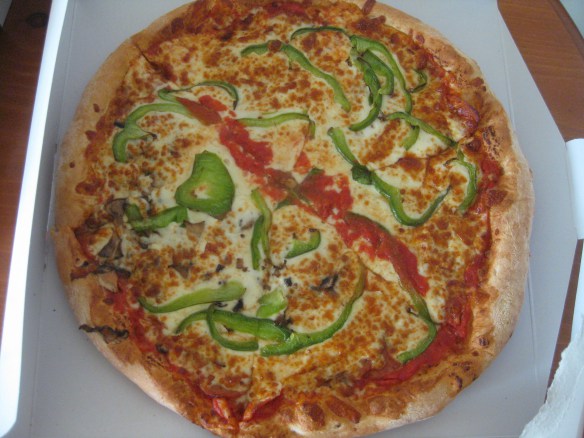 There was really no comparison between the Sydney pizzas and the Baddeck pizza, but there was some similarity between Kenny’s and Napoli. Mainly, I noticed that long strips of green pepper are placed on top of the cheese, while everything else lies underneath. The crust is slightly thinner than an average Halifax pizza, and the sauce isn’t as sweet. 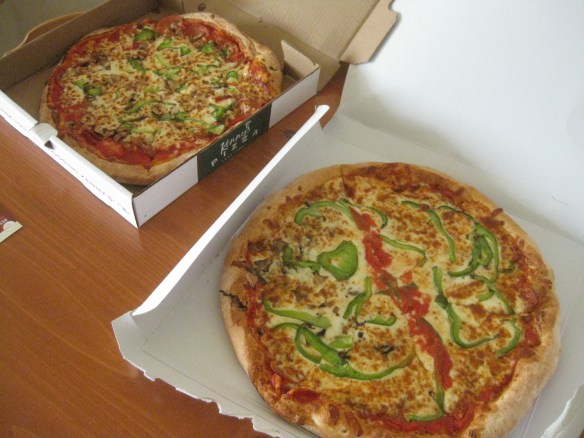 My family preferred Napoli over Kenny’s, and Tom’s over Napoli. But my personal favourite was local legend, Napoli. The sauce had a nice basic tomato flavour, and I liked the overall composition and aesthetics. For me, Napoli was a pizza-eating experience, while the others were just pizza. 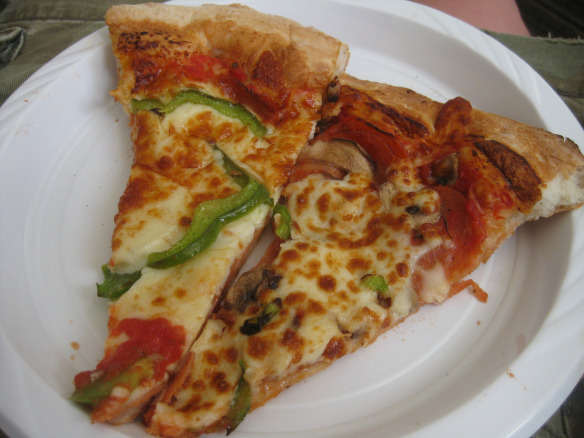 Side by side comparison. Left: Napoli. Right: Kenny’s.

My dreams of discovering a homogeneous pizza style in Cape Breton have been dampened, but Sydney, at least, does seem to have a sort of pizza culture marked by “Combination Pizzas”, thin hand-tossed crusts, unsweetened sauce, and long strips of green pepper decorating the cheese. If nothing else, I have discovered Napoli Pizza, which now sits on my list of memorable pizzas.

I wish I could have sampled more pizza, but I only had a weekend to conduct my research. I have also been told to try Caledonia and Jeffrey’s in Glace Bay, Fat Boys in New Waterford, Pizza Palace in Whitney Pier, Wabo’s Pizza in Cheticamp, and Cedar House in Boularderie. That’s a lot of pizza! Suffice to say this quest is incomplete. If any Capers want to set me straight, be my guest and comment below!