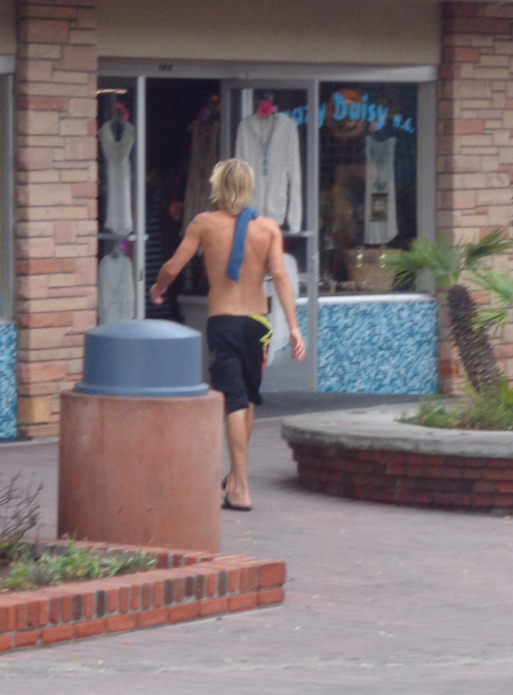 I was lucky enough to just wrap up the best month of my life hands down. Had friends visiting from near and far, got married and went on a kick ass honeymoon.

Our honeymoon destination was a bit untraditional but we like to shake things up so we went to California.

While we weren’t on a star-seeking adventure, California is just spewing famous people that we happened to come across. So I figured I would share some of those with you!

Our first stop was Catalina Island. Yes. Home of the CATALINA WINE MIXER. I’m fairly certain that Step Brothers was not actually filmed on Catalina Island but an episode of The Bachelor was so there’s that.

Catalina Island is UNREAL. Super small, incredibly gorgeous and super relaxing. The seafood is fresh and the California wine was delectable.

One night after an incredible dinner we headed to the local karaoke bar (as you do) and took in some of the wonderful talent Catalina has to offer… Ok there was only one talent and his name was Troy. And he sang EVERY SONG. Except for when two guys rapped Candy Shop. You get the picture.

Anyway as we sit there I turn around to see a guy who looked famous but he also looked like every other surfer dude in California so I didn’t say anything. Next thing you know Troy is singing a Foo Fighters song and The Husband realizes it was Taylor Hawkins, former Alanis Morrisette drummer and current Foo Fighters rock star.

This is as close to Kurt Cobain as The Husband is ever getting so this was a big thing. The next morning bright and early we spot Taylor shirts off getting his day started off right. As The Husband was being respectful of Taylor’s family vacay he chose to shoot creepy paparazzo pics of his back instead….

We made our way back to the mainland where Whitney Port was having a sample sale. I scored the jackpot in the husband department because the second we plugged the GPS into our rental we were off to the Fashion District of LA. I did not expect Whitney Port to be there but sure enough there she was.

Scrap everything you think about ditzy reality stars  when it comes to her because Whitney Port is getting it done. Her office is huge and beautiful, she’s got quite a handful of employees and a crap load of gorgeous clothes. She was chatting with girls shopping and both of her sisters were working with her and she was anything but caught up in the fact that she also moonlights as a TV personality and seriously concerned about the well being of her business. I was incredibly impressed.

So now I’m only 2 degrees of separation from Lauren Conrad and 1 from Whitney Port. Sweeet.

We skipped down to San Diego and stumbled upon Comic-Con. Stumbled being a term I use loosely as it’s hard not to notice flocks of people dressed as Storm Troopers. Anywhoo we cruised around to find that the Vampire Diaries Panel had just wrapped and tons of teeny boppers were loosing their beans over the cast coming out.

Nina Dobrev gave the fans no love, but Ian Somerhalder was all about them. He took pics and when he got on the bus smooched the window and hammed it up. Kudos to him. I get that in public doing your thing you don’t want to be bugged, but Nina wouldn’t BE on TV if it weren’t for these kids ( Especially one Tara Wilcox) loving her. Give the kids a smile Nina!

Anyway check out The Husbands pics. He was pretty tickled that he was tall enough to get to take them.

Anyone remember How to Make it in America? We’ve got Lake Bell her hugging it out with the fans.

While dining in San Diego we also saw David Hasselhoff but the camera was not ready. Sadly the Hoff is significantly skinnier in real life than one would expect. The age of the girl he was with however, was exactly what you’d expect.

The Husband and I next took in Disneyland. Would you get at that Winnie The Pooh trying to be all coy? That willy nilly silly old bear never got close enough for a hug. Oh bother.

The fun continued with a trip to The Price is Right. We couldn’t bring our camera’s in but we were seated in the front row and Drew Carey did not disappoint. He looks better than he ever has and he is a comedic genius. We didn’t get to “Come On Down” but we did get this sweet pic. Don’t mind the quality folks.

So that wraps up Celebrity-Spotting Honeymoon edition!