I’m sitting here with the hubby watching the Superbowl.  I don’t really have a stake in this game, but there is one team that I am rooting for.

When I was dating, I quickly learned to keep my mouth shut when my boyfriend was annoying me. Often, a frustration within my relationship would only be a fleeting issue that paled in comparison to the benefits and the beauty of being in a loving relationship with a wonderful man as we planned and dreamed about our future.

But during those inevitable times when I would ultimately become frustrated by something that my boyfriend did or did not do, when he was obliviously insensitive or when he would find fault with something I did, I often turned to some of my closest friends to take solace in the solidarity of girl-talk.

Once we resolved our issues, or when the problem was revealed to be so silly that it didn’t warrant being brought up, my boyfriend and I would be cruising along in relationship bliss again. Unfortunately, my friends would still be harbouring resentment towards my boyfriend, feeling that I needed to get out of such an unhealthy relationship with such a terrible guy.

So I learned to stop complaining about my relationship to others.

We tend to complain way more than we praise, don’t we? And when we complain, all people hear are the exaggerated negatives. But those positive parts – the wonderful nuggets of awesomeness that you fell in love with in the first place are stored secretly in the corners of your heart.

Where does that leave other people in our lives? Friends and family who care about us and want the best for us? They’re left missing the whole point of our relationship.

Along with a shared understanding that divorce is never an option, once we got married, Dan and I also recognized that we need to be each other’s biggest fans, regardless if we were feeling that way or not. Now that I have married this guy, my job is to cheer for him and champion him, both in our home and out in public. My love for him means that I want others to see him in the best light, and the best way for that to happen is to rave about him instead of ranting.

This isn’t always easy. Sometimes, when I don’t necessarily agree with a decision my husband has made, or when I find myself angry at him, I let my guard down. My tone or my words betray the promises I made to love my husband – to be his greatest champion in good times and in bad. When this happens, I find myself without a leg to stand on, because I know that I have undermined my marriage.

But then, there are other times when I firmly stand up for my husband to others, including my own family, despite the fact that I myself do not agree with something he has decided. This gives power to our marriage, strengthening the two of us as husband and wife to work through disagreements as a team, knowing that we have each other’s best interest at heart.

This is why you won’t see a lot of complaining on this blog about my husband.  Often, I won’t even blog when I am feeling upset, because all that wants to flow out of me is hurt or pain or rage.  But I know that while I may only be discrediting my husband for a few short minutes, I am discrediting my marriage, and that will take a longer time to heal.

I fear that as our lives become more and more public thanks to Facebook and blogs and the Internet, we have opened our marriages up to more attacks than ever. We have become desensitized to the effects of such quick and easy public sharing of our thoughts and emotions, and we forget that others form quick opinions based on such insignificant snip-its.

You are part of a team.  If you tear down your partner, the whole team will suffer.  Build up your teammate.  Stand up for your spouse.  Be his biggest fan (or her’s).  Champion your relationship.  Champion your marriage. 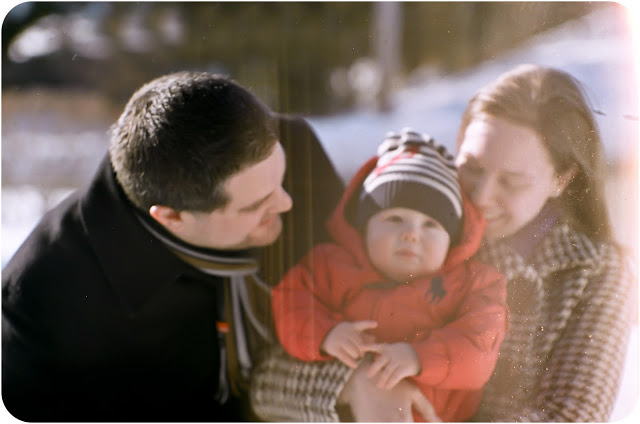 My Winning Team
Photo taken yesterday, February 5th, 2011
10 months, 4 weeks, 3 days old
Laura (@LauraORourke) is a photographer who lives in Halifax, Nova Scotia. A wife to Dan and a mother to Cameron, she spends her free time blogging and reading. Her blog finds its home at http://miraclesofamily.blogspot.com. Her photography can be found at http://www.olalaphotography.com.