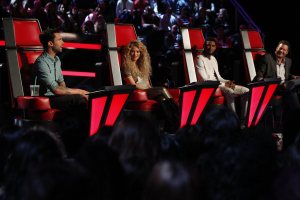 The Voice is down to eight performers, and I’m enjoying the season so far. This show continues to feel fresher and more exciting to me than American Idol ever does.

The performances are flashier and the songs are more current, even if the singers themselves aren’t all of the caliber of Candice Glover. The set designers really killed it this week. 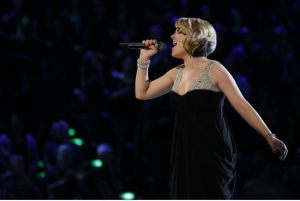 She closed the show, but can we talk about Amber Carrington first? What a performance. I keep expecting her to fall behind some of the other singers in the competition, and every week she reminds us that she’s amazing. “Skyfall” was a challenge and she nailed it. What a well-rounded, versatile performer. I was blown away. The best of the night.

I’ve thought all along that Judith Hill probably should win this competition (though Amber is giving her a run for her money now), even though I’m not sure she will. “#thatPower” is a dumb name for a song, and I don’t really care for will.i.am. (Don’t even get me started on Bieber.) But the song was really fun and the performance was visually exciting; I felt like I was watching Judith perform her own song as a star on an awards show.

Someone who might win is Danielle Bradberry. That girl comes out looking and singing like a star every single week, and a country artist hasn’t won The Voice yet. The song was, I thought, a bit boring, but Danielle is just a fantastic singer. She makes her performances look effortless.

I enjoyed Sarah Simmons and Michelle Chamuel this week. They’re both very strange, creative women and I like having them around. I didn’t love “Grenade” as a song choice for Michelle, and “Somebody I Used To Know” is a bit overdone, but both women are great singers.

In the past, I haven’t loved Holly Tucker. But this week, she really nailed it. I like The Band Perry and I think the song she chose was a really nice fit. I also liked The Swon Brothers a lot more than a did last week, in large part due to their cool campfire setup. But also their singing. I know, we’re here for the singing.

I didn’t love Sasha Allen’s performance this week, which is unfortunate since she’s the only performer left from Shakira’s team. Are Shakira and Usher suffering because they don’t have the fanbases that Adam and Blake do? Anyway, I expected Sasha to do well with the song she was given, but it fell flat for me.

So which two performers did I want to see eliminated? Probably Sasha Allen and The Swon Brothers, but everyone left in the final eight is pretty talented.

So, I was in fact pretty shocked to find out who got eliminated. Shocked! Sarah Simmons was eliminated, as well as Judith Hill. I’m less surprised about Sarah – even though I like her, she was a little strange and that performance wasn’t her best. But holy crap, Judith? I liked her performance last night, and she has consistently been one of the best performers this whole season. I’m really disappointed.

That’s two gone from Team Adam, so now Adam, Usher and Shakira all have one singer left and Blake has three. WTF? That ain’t right. What do you guys think?

Checking in on ‘The Voice’ – Top 8 Performances and Results
https://haligonia.ca/checking-in-on-the-voice-top-8-performances-and-results-78128/