A/Comm. MacNeil announced his retirement  January 29th, after serving more than 38 years in the Force.

‘Chief Superintendent Brian Brennan’s appointment came in consultation with the Nova Scotia government and is part of the RCMP’s ongoing commitment to work closely with its provincial partners,’ said RCMP Commissioner Bob Paulson. ‘With 28 years of service, Chief Superintendent Brennan’s operational and leadership experience will serve the RCMP and the people of Nova Scotia exceptionally well.’

As Commanding Officer of ‘H’ Division, C/Supt. Brennan assumes the responsibility of leading Nova Scotia’s Provincial Police Service. There are 52 RCMP detachments and offices in Nova Scotia and more than 550,000 people live in RCMP jurisdictions in Nova Scotia. He will assume the rank of Assistant Commissioner and will become a member of the Commissioner’s Senior Management Team.

‘I want to thank Assistant Commissioner MacNeil and wish him the best of luck in his retirement,’ said Minister of Justice and Attorney General for Nova Scotia, Lena Metlege Diab. ‘I’m very pleased that someone we’ve worked with for several years has been appointed to this position. Chief Superintendent Brennan knows the issues facing our province and we’ll work together to maintain the strong relationship enjoyed by the province and the RCMP.’

Born and raised in Prince Edward Island, C/Supt. Brennan joined the RCMP in 1986. He has 28 years of service with the RCMP in both operational and executive management positions. The first 16 years of his career were spent in Saskatchewan in general duty policing in rural and Aboriginal communities and as a member of the Saskatoon Integrated Drug Unit. He held numerous leadership roles at National Headquarters in Ottawa before transferring to Nova Scotia to assume the role of Federal Policing Officer (FPO) for ‘H’ Division. In June 2011 he was promoted to his current duties as Officer in Charge of Criminal Operations.

‘I am extremely honored to be appointed Commanding Officer for the RCMP in Nova Scotia,’ said C/Supt. Brennan. ‘Leading and working with such a dedicated and dynamic group of employees committed to enhancing public safety in the province will be truly a career highlight for me.’

The date of the formal Change of Command Ceremony to mark today’s appointment has yet to be determined. 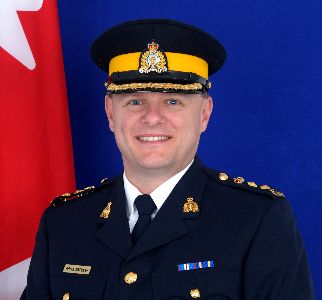