I was so thankful for all the help that was offered to me while I was pregnant with Cameron. Friends and family and people I didn’t even know sent boxes of baby clothes and letters of encouragement. Having a baby has the simultaneous effect of making one feel so frightened and alone and yet laden with a giant, world-altering responsibility. Watching a community form around me assured me so beautifully that everything would be perfect.

One day, when I was giant and pregnant, my Mom and my sister were helping me sort through some of the clothes that we had received. We sorted items by size and by what I would likely dress my baby in. All of a sudden, I stopped on one particular sleeper.

“This can go in the donate pile” I informed my family. “It has Pooh on it”.

Now, before I go on any further, pretend you didn’t just read that sentence. Pretend that you heard it. Without seeing it spelled, you would have likely assumed that I had said “It has poo on it”. My sister and mother were flabbergasted. First of all, they were kind of grossed out. Then, they wondered why I would ever want to donate something that clearly should be thrown out.

I probably sounded ungrateful. I probably sounded snobby. But the truth is, I just didn’t want my child to start his life surrounded by fictional characters associated with multimillion dollar corporations. That just isn’t cute.

Later on, after Cameron was born, I did a pretty good job sticking to my guns. Cameron wore nondescript clothing, not associated with any identifiable brand. At one point, my Mother-in-Law took my little family shopping and suggested she wanted to purchase a full-bodied Tigger costume for her grandson. Thinking I was being polite by refusing her, she insisted. Finally, I firmly told her that I would never put Cameron in that.

It isn’t just Winnie the Pooh characters that get my back up. It is Mickey. Buzz Lightyear. Yes, even Elmo. Characters who front corporations that are hoping to not only empty my wallet but also use my child, my perfectly innocent child, as a billboard. I was not willing to subjugate my son to that within minutes of his birth.

Although my resolve has loosened over the past year and a half, I was still firm. I would never purchase my son clothing that advertised a certain brand, no matter how popular that brand is with the tiniest generation. I did however support my husband in purchasing a Toy Story toddler chair for Cameron, but this was with the knowledge that there were no characterless options. And I did dress Cameron in a Cars outfit that my Mother-in-Law gifted Cameron because he pretty much looks cute in anything and, with a growing boy, we seem to need all the clothes we can get our hands on. But, despite those two exceptions in a year in a half, I think I was doing pretty well.

And then, Cameron started talking. He doesn’t talk very much and he doesn’t have many words, but he does say Elmo. (It sounds more like “AhOh”). When we turn on Netflix, Cameron asks for “AhOh”. If Sesame Street happens to come on television, Cameron happily proclaims “AhOh”. And if he sees the one Sesame Street counting book that is on his book shelf, Cameron brings it to us, sounds out the word “book” and then follows it up by “AhOh”.

So I did what any self-respecting mother who loves her son would do. I went out, and I bought my son an AhOh.

That’s right, Sesame Street. I am now your pawn. I went against my ethics. But I don’t regret it. Cameron loves AhOh. So I chose my son. I chose Elmo. 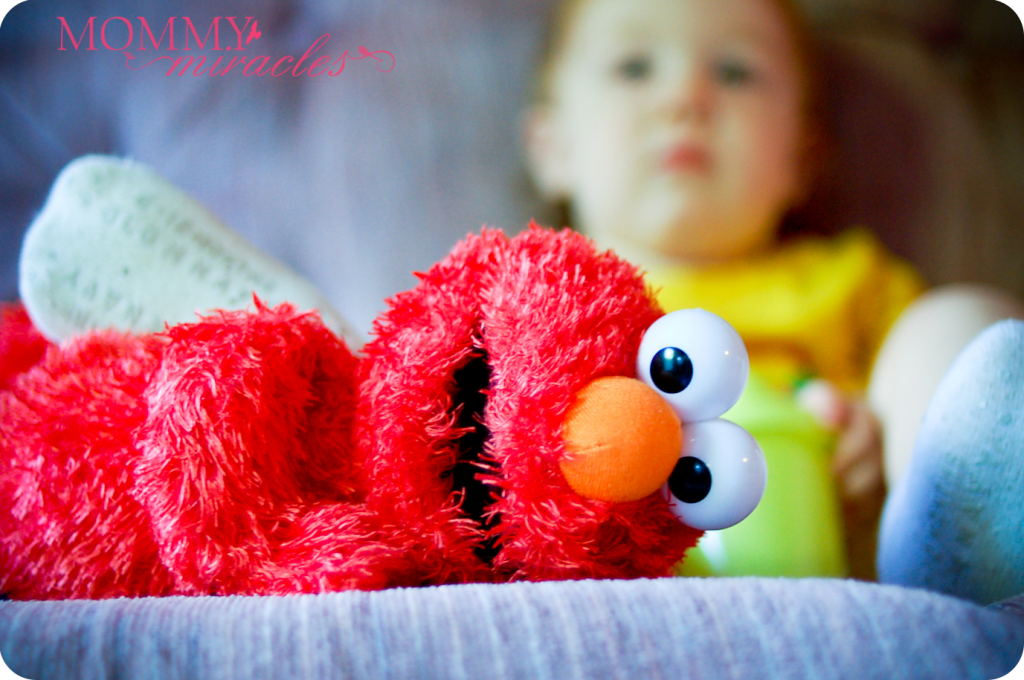