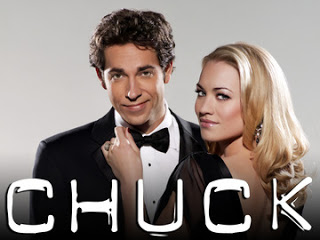 You know how you make a Thanksgiving episode stand out? Air it after Thanksgiving and make it about Black Friday and turkey leftovers.
Mama B was back on Chuck this week with an interesting twist – Volkoff is in love with her! In a season that has kept viewers guessing about Chuck’s mom’s true nature (good? evil? bipolar?), I think we can now rest assured that Frost is, at the very least, a caring mom.
This week Volkoff discovered that Chuck and Sarah hadn’t actually been killed and instructed Frost to make sure the job was done. She had to save Chuck, and ended up in castle with them. It was pretty awesome to watch Chuck actually use his stripper pole kick from his lesson with Morgan to take out one of the assassins. Once Volkoff discovered that Chuck and Sarah had Frost, he showed up at the Buy More prepared to do anything to get her back.
Volkoff’s guns-a-blazing attempt to retrieve Frost mirrored Sarah’s recent search and rescue mission to retrieve Chuck, and it soon became clear how similar their incentives were – Volkoff is in love with Frost. There was lots of Buy More action – Casey getting captured, Morgan trying to hide and be heroic at the same time – but the comedic twist came when Chuck’s mom finally told Volkoff that Chuck is her son in order to prevent him from killing Chuck.
What’s great about Timothy Dalton in this role is that he switches so easily from manic, scary crime boss to sappy, sweet boyfriend. He was heartbroken that Frost hadn’t trusted him to make a connection with her family and insisted on attending Thanksgiving leftovers dinner at Ellie and Awesome’s place. 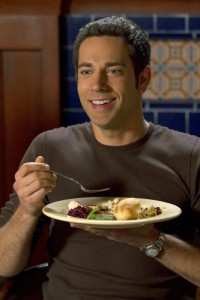 The whole dinner was hilarious, especially because Chuck had to confess the whole truth to Awesome in order to keep Ellie safe. I love Awesome under pressure (one of the best moments was when he yelled out “Bourne Identity” a second time in charades) and we’ve now come full circle in the story – Ellie’s in the dark, Awesome’s forced into keeping secrets he doesn’t want to keep, and Chuck is the Intersect again.
Yep, that computer contained some sort of brain scan memory problem thingie that Ellie fixed, and then the password was an inside joke meant for Chuck. The answer to “1 or 11?” was “Aces, Charles” and with that, Chuck got the Intersect back.
Personally, I’m glad he has it again. Chuck without the Intersect is kind of boring because he’ll never be as good of a spy. Sure, he’s smart. But that one stripper pole kick doesn’t get him very far in battle. Plus we’ve got a new bumbling wannabe spy, and his name is Morgan. I would like to see Ellie find out about all this eventually, though. Her character needs something to do other than be in the dark or worry.
We still need to wrap up Mama B’s storyline, too. She’s still planning to take down Volkoff’s organization from the inside, and it wouldn’t surprise me if she ends up needing Chuck’s help for that. Now that she’s saved Sarah’s life as well (with a very well-constructed threat) Chuck trusts her, and that means he’ll do almost anything for her.
This episode wasn’t the best, but I still thought it was really good. There were a lot of funny moments from several characters – Jeff and Lester’s antics at the Buy More, Morgan coming out of hiding with his hands up and a gun taped to his back, Awesome trying to play it cool – and I was left feeling very curious about what’s to come. What did you think of the episode? Any predictions for the next step in the Volkoff storyline?