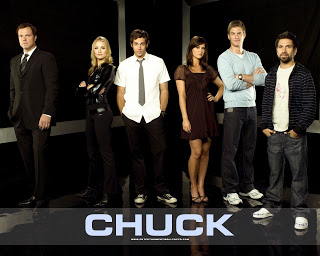 My recording got messed up, so I didn’t have a chance to see Chuck until tonight. (It unfortunately was at the bottom of my priorities, what with a gripping episode of The Bachelor and Katy Perry’s appearance on How I Met Your Mother.)

Last week’s would have been finale was pretty hard to follow, but I think “Chuck Vs. The Seduction Impossible” did a pretty good job. I especially liked that it showed us that Chuck and Sarah as an engaged couple are still the same characters we loved from before. 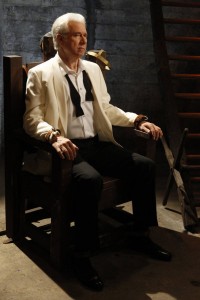 On the comedy side, John Larroquette’s return as seductive spy Roan Montgomery was fantastic. I especially loved all the stuff with him and General Beckman. Her relationship with Roan, her field work and her dirty blond eighties hair all had me laughing. Roan needed rescuing in Morocco, so Sarah, Chuck and Casey escaped from the intense joy of their loved ones (a new baby and an engagement – of course everyone was going nuts) to take on the mission.

Chuck also had some funny lines this week, and the spat between him and Sarah over whether to have a big family wedding or elope felt natural and well-written. I loved how they tried to out-seduce one another – Sarah totally won that competition with her belly dancing get-up. Then of course we had Morgan’s reaction to the idea of his best friend eloping, and his concerns over meeting Alex’s mom. 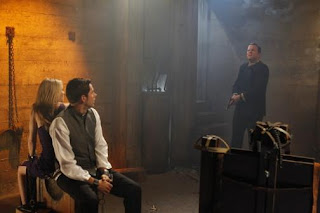 By far, though, the funniest moment of the night was when Casey tried to seduce a female guard. He was actually doing OK until he accidentally insinuated that she was fat. I know Casey is supposed to be old and completely not charming, but I find that totally charming.

The scenes between Ellie and her mom were sweet, and they made me wish that Mama Bartowski could be around all the time. It also reminded me that Ellie doesn’t know that Chuck is still a spy, and something needs to happen about that soon.

The realization that Sarah really wanted to elope because of her lack of family, not Chuck’s crazy family, was sad but fitting. How will Chuck fix this one? Or will Casey walk her down the aisle? I’d totally be OK with that.

Even though this episode didn’t measure up to last week’s action-packed episode, I thought it felt like classic Chuck and gave me a good feeling about the rest of the season. What did you think?