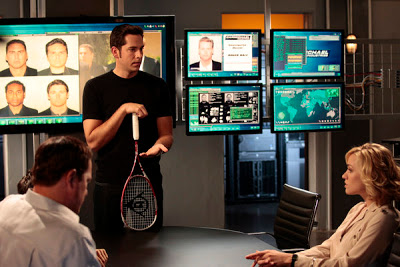 It’s easy to make a lot of jokes about how poorly NBC does in the ratings. But I’ve got to hand it to them – they air a lot of my favorite shows (Hi, Community and Parks and Recreation! I miss you, Friday Night Lights!) and I, for one, am happy that they haven’t cancelled shows I love that only I and about nine other people are watching. Case in point? Chuck. Who would’ve thought this little show would get five seasons? Yet here we are, in the fifth and final season, and there’s a lot to talk about.

Chuck and the gang are in new territory, no longer working for the CIA and instead acting as self-employed private spies. And there’s the fact that Morgan now has the Intersect. As you could have guessed, that provided a lot of comedy in the first episode back. It also gave Chuck a lot to work with, as he started to question his role within the group without having the Intersect. That’s what made him special, and now someone else has it. I’d be bummed, too.

The first episode had everything Chuck fans want – action and excitement, comedy, and heartwarming moments.

Chuck and co. hit a lot of bumps in the road during this first episode – as Chuck said himself a few times, “we’re still working out the kinks.” Morgan as a spy is even more blundering than Chuck was back in season one. After all, Chuck was given the Intersect because he’s special, because he’s incredibly smart and had a brain that could handle it. Morgan has…a hell of a lot of heart.

The first episode was less about Morgan, though, and more about Chuck realizing he still had a role within the group without the Intersect in his head. The scene where he burst through a window and landed on the van? Amazing. And Chuck’s plan to get Sarah her dream house – which ended up being much quainter than he’d planned – was incredibly sweet, even if that plan has been put on hold thanks to a sudden lack of cash.

The Big Bad this season is Decker and the CIA itself (or at least part of it, we still love Beckman), and it’s being set up as the culmination of the four previous seasons. Obviously this can’t be entirely true, since Chuck has come so close to cancellation so many times that it’s impossible for an overarching plan to dictate all five seasons. But Chuck always managed to pull things together and deliver a great season finale, and I have faith that viewers will be left satisfied when the series as a whole is complete.

Chuck: The Beginning of the End
https://haligonia.ca/chuck-the-beginning-of-the-end-47512/