Ho ho ho! Do you like reminiscing about old times, or fantasizing about snowy adventures? The following books take you from fantasy lands to old school Wales to New York City. Some are more Christmasy than others, but all have a magical touch of the holiday season.

The Lion, the Witch and the Wardrobe by C.S. Lewis. The classic children’s novel begins when four siblings are sent away to safety during the Blitz. The world of Narnia they discover inside the aforementioned wardrobe has been frozen in winter for 100 years due to the spell of the malevolent White Witch. This magical tale of good and evil features memorable characters and talking animals, and is a favourite the world over. If you don’t recall, Father Christmas even makes an appearance, so it might be time to reread this chilly adventurous tale.

The Dark is Rising by Susan Cooper. The second book in the series of the same name, The Dark is Rising is a Newbery Honor Book. The fantasy tale filled with folklore and magic takes place around Christmas time, when Will Stanton turns 11 years old and discovers he belongs to an ancient order that must fight dark forces. If you liked the Chronicles of Narnia and Harry Potter, you should definitely check out this classic fantasy novel and the rest in the series.

Hercule Poirot’s Christmas by Agatha Christie. Fans will recognize Christie’s classic character Hercule Poirot, the Belgian detective who appeared in 33 of her novels. In this 1938 whodunnit, millionaire Simeon Lee holds a Christmas gathering at his home with guests that are admittedly suspicious of his motives for holding this festive function. Sure enough, the gathering turns deadly and Poirot is called in to investigate. If you’re looking  for a novel that’s not too Christmasy, you can’t go wrong with a little murder mystery. 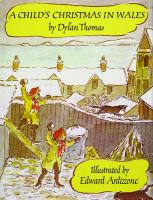 A Child’s Christmas in Wales by Dylan Thomas. In 1952 Thomas recorded a Christmas piece for BBC radio. The resulting work has since been turned into a book several times over, telling the story of Christmas from the point of view of a young child. A nostalgic and beautifully descriptive tale, this book is a definite Christmas classic. As a bonus, Thomas’ original recording is still available online and from the library, so you can listen and read along at the same time.

Miracle on 34th Street by Valentine Davies. Davies won an Academy Award for writing the film of the same name, and this novella was published in conjunction with the release of the movie. In this well-known story, Kris Kringle fights to have his identity as Santa Claus accepted with the help of some true believers. Perhaps a bit saccharine for some, but the novella and the film are classic Christmas fare for a reason.