It’s officially June, and guess what the temperature here today? 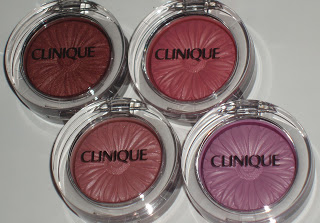 After a little break last week and a busy weekend, I am slowly back with Clinique week!

As soon as the 8 new Clinique Cheek Pops (reg. $24 each) surfaced at Sephora and other stores (except Shoppers, which I am not sure why), I started collecting them. Ended up with 4: 07 Cola Pop, 13 Rosy Pop, 14 Heather Pop and 15 Pansy Pop. 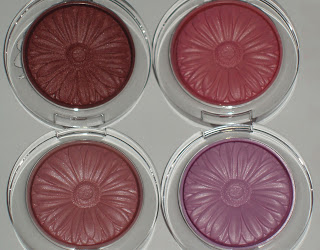 That flower pattern on the surface would never get old to me, and the clear packaging definitely helps the appeal.

Cola Pop and Pansy Pop are unique, in my opinion, so they are obvious choices. The line is permanent though, no rush to stock up 🙂

I also wanted darker pinks that would possibly show up on my skin tone. Rosy Pop (top right) and Heather Pop (bottom left) fit the bill. Nude Pop sounds good in theory but I think it would just get lost on my cheeks.

Here are the 4 shades swatched with my finger swirled on the surface a few times. They show up more sheer (but buildable) with a blush brush on the cheeks of course, and last a long time too.

Turns out Heather Pop is the muted version of Rosy Pop. You don’t need both. You definitely need Cola Pop, the most pigmented shade of them all. And if you have a thing for cool toned pinks, Pansy Pop is waiting 🙂