The Canadian women are killing it in Rio, and I just made a pot Hodge Podge but now on with the week in review.

Vernon’s Thunderbird Diner is being built across from Beacon Electric on Hammonds Plains Rd.

After a few decades of serving the Sackville community, the quirky Millwood Convenience and Romy’s Pizza have closed.

After three years SugaRush on Sackville Dr has called it quits. Yesterday was it’s last day.

Dartmouth Crossing is losing two stores the Stitches MegaStore which just opened in the spring is closing this week, and Le Chateau Outlet is closing today. It’s not all bleak though Gap Outlet and Guess Factory Store will be opening in the coming weeks.

Got a chance to visit Workshop & Co. yesterday on Maynard (at Roberts St.), beautiful space, lovely decor, and fantastic furniture. This is not the store if you are on a student budget, though.

The former Menchies space across from Grand Parade on Barrington will be a third location for Smiling Goat Coffee.

There was a rumour that Sobeys might open an urban prototype store in the former Scotia Square GoodLife, but it is going to be the new home of Canadian Language Learning College. However, the former eye clinic in centre court appears to be a boutique for the Halifax Mooseheads.

Hallowe’en stores are starting to pop up; Spirit is getting ready at Mic Mac, and Ripsters has moved from Sackville to the industrial end of Bayers Lake.`

The Starbucks on Spring Garden at Queen has moved up the street to the corner of Dresden. The new store is set up to serve alcohol, but that won’t be happening until the new year.

Jumping Bean has opened their first cafe outside of Newfoundland on the Bedford Hwy at Hammonds Plains.

I was at the groundbreaking for IKEA last week; they say they are on track to have the store open in 12-14 months (official rendering above). You have to assume that the push will be on to tap into the very lucrative back to university market. They also said they will start having the 2017 catalogue delivered to metro doorsteps this week. I was also taking to a few of the home visitors that were in town, and they said they want to tap into the fact we love the Kitchen Party.

Cora was in town last weekend and even served a couple of tables at her namesake restaurant in Clayton Park.

The former Staples land at Downsview has been rezoned to allow the building of a hotel. 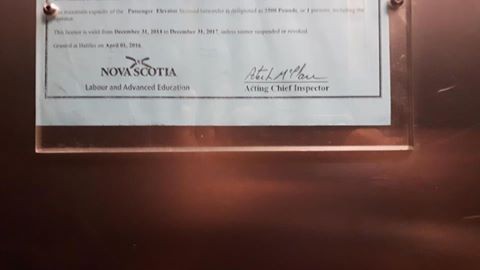 Maybe you have noticed, maybe you haven’t
But for the past 18 years, every elevator license in the province was signed off by Randall Kennedy. Well, Randall has retired after 43 years in the elevator business, and there is an Acting Chief Inspector in town.

If only there were a place to get them even cheaper but compare at $12 for birch sticks at HomeSense.

Note: I’ll be in my 2nd favourite city next week. Oh! all the food! I will try and have the update ready next Sunday but I have a busy schedule, and it may not show up until Monday.