I have found myself online shopping more often than going to stores. They make it too easy to hand over your cc, don’t they 🙂 Stay tuned at the end for a little notice. 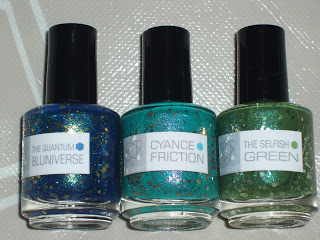 I have given in to the indie nail polish craze, just 2 purchases for now, but who knows later 🙂
From the famous Nerd Lacquer, I got the trio from the NerdCrush series – The Quantum Bluniverse, Cyance Friction and The Selfish Green.
Some background on this etsy store: the nail polish is so popular that the store only opens at certain time, and for a very short time period. Then the store is set on vacation mode (like right now) so the owner can fill orders and ship them out. And there’s always the story of limited sources of supplies and time that most indie sellers face. 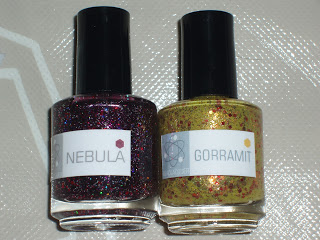 Due to raves on nail blogs, I couldn’t pass up Nebula (from the Spaaaaaace series) and Gorramit (from the Firefly series) either. All 5 are heaven in the bottles and quite unique, don’t you agree?
Nerd Lacquer sells for $10/ bottle, shipping to Canada for 5 bottles is $8.50. I placed the order on March 12, got shipping confirmation on March 27, and received the package on April 10, almost a month all together.
Harlow & Co also sells Nerd Lacquer but stocks are also low or sell out quickly. It is always a crazy race trying to order some pretties like these. 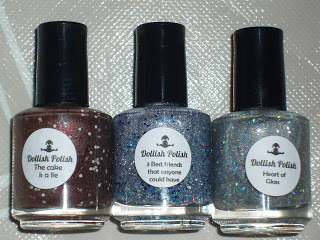 From Dollish Polish, I got The Cake is a Lie, 3 Best Friends that Anyone Could Have and Heart of Glass.
Same story, the store is on vacation mode at the moment. Dollish Pollish sells for $8 a piece, shipping to Canada for 3 bottles is $4.85. I ordered on March 11, got shipping confirmation on March 20 and I got them a week after. Less wait time than Nerd Lacquer.
One thing I don’t like about etsy is that stuff doesn’t stay in your cart when you are trying to get through with payment. If a certain item sells out before your payment is accepted, it just disappear from your list. It frustrates people. 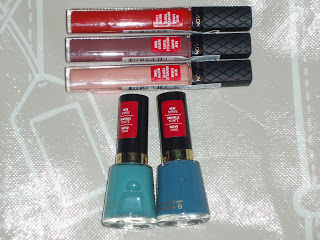 At Lawtons, I found the Revlon Gucci Westman Escapism (LE Spring/ Summer) collection on clearance. These have quite short shelf appearance, I was surprised.
I got:
– ColorBurst lip glosses in Sizzle, Sunbaked and Bellini, $2.62 each. I didn’t get Crystal Water as many people said it was just glitters, no pigmentation
– Nail polish in Sheer Seafoam and Surf, $.99 a piece. I passed on Gold Coast and Runway Pearl, saw no sign of Red Bikini.
After checking swatches online, I found out that Sheer Seafoam, while looking awesome in the bottle, is extremely sheer 🙁 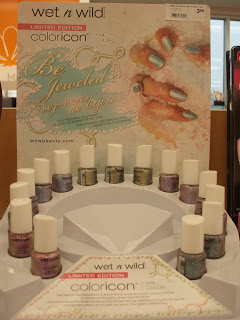 For new display update, look what I found at Lawtons too – a brand new/ untouched Wet n Wild Color Icon LE collection called Be Jeweled.
If you haven’t heard, this collection is Wet n Wild’s version of China Glaze Prismatics. We have to pay about twice as much compared to the US (CAD3.99/ bottle), but at least we (the Maritimes) get them, and they are still cheaper than China Glaze. I’m hoping it will make its way to Walmart and Shoppers too but I don’t know that for sure, unfortunately.
Now on to a bit of blog announcement, I will be posting less often on here from now on. A big nail blogger announced a hiatus yesterday, realizing that nail polish had taken over her life. I think I am on the same boat, not to the same magnitude but a similar case, which got me thinking a lot.
I have been blogging almost daily since the very beginning, knowing that it takes a lot of time and effort, but see that quite a number of posts don’t get a comment for a while now. I do know that lots of people read and move on (I do too, most of the time), but maybe the things I post about don’t spike enough interest for comments.
I appreciate all of you and am happy when you told me you found the blog useful, but I will slow it down, both blogging and shopping, before they become a source of frustration instead of inspiration. I am still around on here and twitter, if you need me. Have a great day!